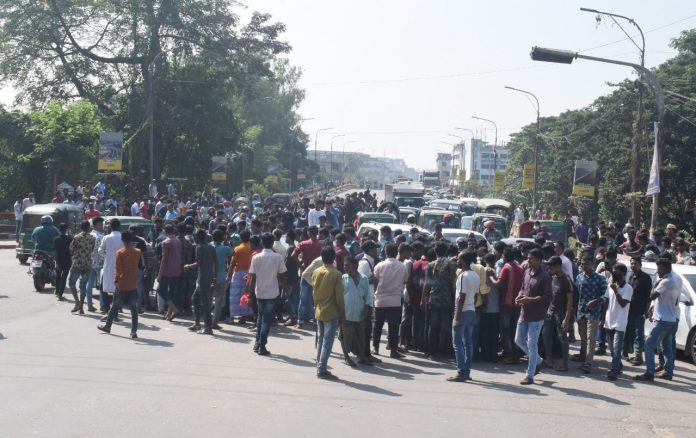 A section of bus owners resumed bus services in Chittagong on Sunday, although the nationwide transport strike continued for the third day in other parts of the country.

A faction of the bus owners association took the decision to resume services on Saturday.

Passengers claim the bus operators have doubled or even tripled fares compared to the regular rate, leading to difficulty despite the resumption.

In the early hours of Sunday, a number of public transports were spotted around the city. Large numbers of people lined up to get on board.
Ekram Hossain, who works for a private company, said: “Today (Sunday) I came to Agrabad from Tiger Pass with Tk20, whereas the usual fare is only Tk5. How are ordinary people going to survive in this situation?”

Bishu mojumder, a bank official in the Oxygen area of the city, said: “I heard the transport strike got called off, but there are very few buses on the streets. These are not only overcrowded, but they are also charging us a lot more than usual.”

Sajidul Islam, a student at a private university, said laws should be enacted to ensure that ordinary people are not held hostage by periodic strikes.
Chittagong Metropolitan Transport Owners Group President Belayet Hossain Belal said: “Buses under the association are operating in the city to mitigate public sufferings.”

Admitting that the transport workers are charging double fares, Belayet said: “We resumed bus services to bring the situation under control and the situation will become normal within two or three days. We will take the fare fixed by the government.”

Meanwhile, no long route buses left terminals and many passengers were seen trying to reach their destinations by hiring CNG-run autorickshaws at double the usual rates.
The nationwide transport strike has seriously disrupted the movement of inbound and outbound goods-laden vehicles of Chittagong port, bringing goods delivery almost to a halt.

On Wednesday, the government raised the prices of diesel and kerosene to Tk80 from Tk65 at the retail level.