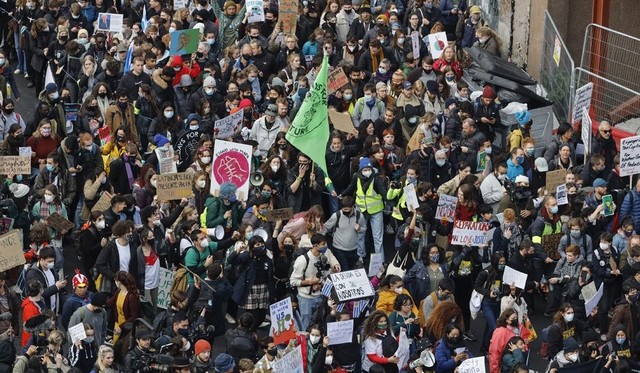 Defying biting wind and steady rain, tens of thousands of protesters took to the streets of Glasgow on Saturday in noisy and colourful protests, calling on global leaders to take action drastic enough to match the scale of a climate crisis already wreaking havoc on parts of the globe.
Waving banners, beating drums and chanting, an array of demonstrators — including members of trade unions and faith organisations, as well as left-wing groups — took over large parts of the Scottish city, which is hosting the COP26 climate summit. By midafternoon, a long, winding line of protesters was making its way through the city, and by late afternoon they were still streaming into Glasgow Green, a city park, to hear speeches from activists.

The protest illustrated how the battle to curb climate change had become an umbrella for a growing protest movement that aims to put global leaders under pressure for a broad range of causes, including racial justice and income equality.

“We should not underestimate the significance of how the climate movement has broken through into the mainstream in the last two years because it’s really starting to change people’s consciousness,” said Feyzi Ismail, a lecturer in global policy and activism at Goldsmiths, University of London.
“I think it is more important than what’s going on inside the COP meeting because it’s applying the kind of pressure that’s needed to force governments to act, but also to take far more radical positions than they might have,” she added.

Police did not provide an estimate for the size of the crowd. Organisers said that more than 100,000 people took part, and while that was not possible to verify independently, the gathering was sprawling and extensive; at one point the procession took more than an hour to pass a fixed location.

According to some organisers, more than 200 events were planned around with the world, with more than half of that number in Britain. In London thousands marched from the Bank of England to Trafalgar Square, and there were protests in other British cities including Birmingham and Bristol.
The New York Times