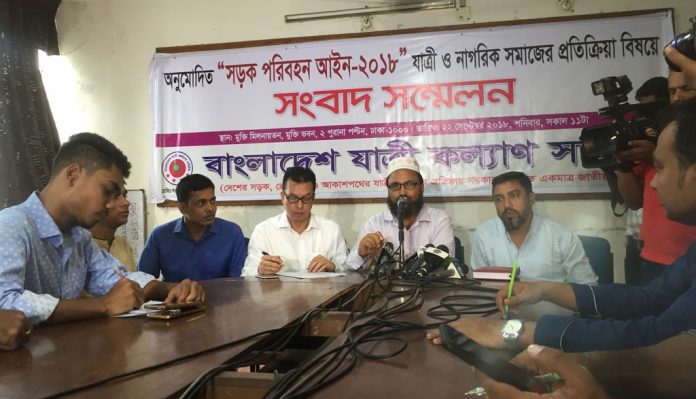 Bus fare should be no higher than Tk1.80 per kilometre, they say

Bangladesh Jatri Kalyan Samity has alleged that the government has increased vehicle fares in response to the demands of bus and launch owners without considering the interests of passengers.

The organization has demanded that the government rescind the increased public transport fares and set them at an acceptable level.

Jatri Kalyan Samity voiced the demands during a press conference in Shegunbagicha on Monday.

BRTA and BIWTA announced a 27% hike in bus fares and 35% hike in launch fares on Sunday night in the wake of strikes by launch and bus owners after the government hiked diesel prices by 23%.
Mozammel Haque Chowdhury, secretary general of Jatri Kalyan Samity, said: “After the increase in the price of fuel, the government said it would talk to all parties and increase fares to a tolerable level, but its actions did not reflect its words. It is a trap, where the government has increased the fare only in line with the demands of the bus-launch owners.”

He said a more acceptable rate for the bus fare would be Tk1.80 per kilometre, instead of the announced Tk2.15 per kilometre.

He called for similar decreases in fares for launches and other vehicles.

He demanded that the fare for large launches be Tk1.80 per kilometer and for small boats, dinghies, launches and trawlers with a capacity of 150 to 500passengers Tk1.20 per kilometer.

The new rate for launch fares has been set at Tk2.30.

“Without protecting the interests of passengers, the fixing of extra fares has plunged the lower- and middle-income people of the country into a deeper crisis. The way bus fares have been increased in the Dhaka-Chittagong metropolitan areas can be called oppression,” Mozammel said.