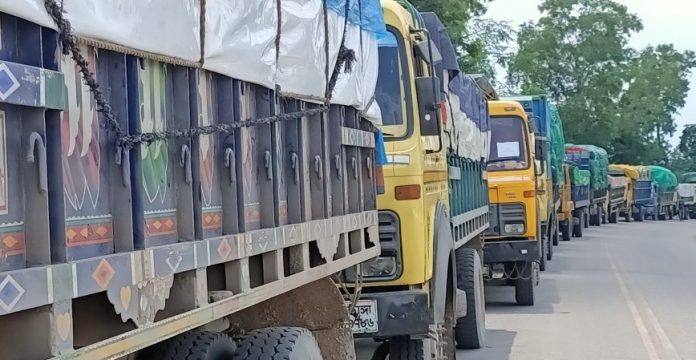 Fares may rise by 10-20%, says top leader of truck owners

The owners of goods-carrying transports have withdrawn their indefinite strike following a meeting with the home minister on Monday night.

The bus and launch owners have already withdrawn their strike after the government agreed to raise the fares.
The truck owners’ association enforced the strike on Friday and kept operations suspended till Monday, demanding the withdrawal of the increased price of diesel and kerosene, withdrawal of increased toll at Jamuna and Muktarpur bridges, and stopping extortion at all city corporations and municipalities in the name of toll collection.

After the meeting, the minister said that he would talk to the leaders of the exporters’ bodies and request them to pay the transporters as per the revised fare.
We came to understand that our three-point demand will not be met and the diesel price will not be decreased. We pressed the ministry to set new, raised fares for goods transport vehicles,” Association President Md Tofazzal Hossain Majumder told Dhaka Tribune.

“Fares may rise between 10% and 20% on all routes. A concrete decision on setting the new fares has not been fixed by the ministry,” he added.

On Wednesday, the government increased diesel and kerosene prices by Tk15 per litre — from Tk65 to Tk80 — in order to keep them in line with rising fuel prices in the global market.
In protest against the move, different associations of public and cargo transport owners and workers on Friday launched a strike for an indefinite period, inconveniencing commuters across the country.