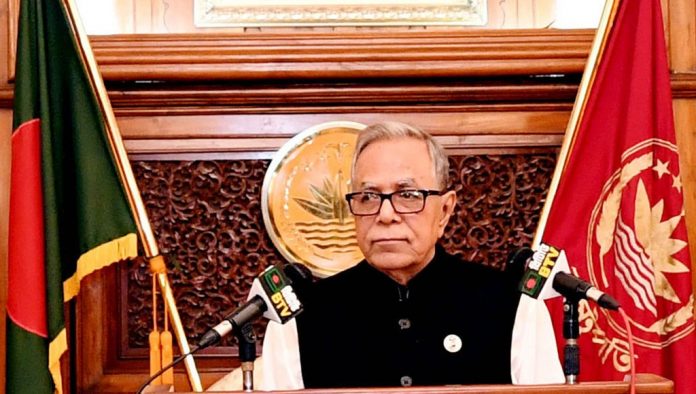 President M Abdul Hamid has asked concerned experts to be vigilant in tackling the misuse of information technology (IT).

“Information technology has, on the one hand, opened the door of huge opportunities for us. But, it has also increased challenges due to its misuse and fraudulence,” he said on Thursday.

He addressed the inaugural function of four-day World Conference on Information and Communication Technology on “World Congress on IT (WCIT)-2021” and “Associo Digital Summit-2021” joining virtually from Bangabhaban Gallery Hall.

The president categorically urged the IT professionals to remain alert in confronting the challenges related to IT.
Noting that the exchange and transfer of IT has added a new dimension to global development, he said, “But it is also important to ensure its sustainable use”.

President Hamid also called upon the government as well as private entrepreneurs, professionals and all concerned to come forward to meet the challenges and explore the potentials at the advent of the Fourth Industrial Revolution.

“In order to implement Digital Bangladesh, we need to create skilled human resources enriched with modern technological knowledge at this Fourth Industrial Revolution era,” he added.

Hamid called the year of 2021 as a unique and memorable in the history of the Bengali nation, saying the country is simultaneously celebrating twin mega historic events – the birth centenary of Father of the Nation Bangabandhu Sheikh Mujibur Rahman and the golden jubilee of Bangladesh Independence.
Digital Bangladesh is no longer a dream but a reality,” he said, adding that the country’s education and judicial activities, healthcare, banking services, etc. have become dependent on IT.

The head of the state said in 2009, only eight lakh people of the country got internet service, but at present the number of internet users is over 120 million.

He also said simultaneously, the number of mobile phone users has increased more than four times.

Bangabandhu laid the foundation of science research and information and communication technology with far-sighted thinking and subsequently Bangladesh became a member of ITU on September 5 in 1973, he added.

But, after brutal assassination of Bangabandhu by the anti-liberation forces on August 15, 1975, the progress of ICT in Bangladesh came to a halt, said Hamid.
After 21 years, Prime Minister Sheikh Hasina, the worthy successor of the Father of the Nation, took pragmatic steps, including development of infrastructure for the advancement of information technology in the country, he said.

The president said the government in last one decade executed many plans, including the four pillars of Digital Bangladesh – connectivity, efficient human resource development, e-government and ICT industry promotion resulting in an unprecedented development of ICT here.

“The digital distance between cities and villages is shrinking… Government successfully reduced the cost of internet bandwidth, developed infrastructure, brought digital devices within the reach and delivered services at the people’s doorsteps,” he mentioned.

He added that people are now availing more than two hundred civic services staying at home through mobile phones.
The president said the digital economy is developing in the country with the implementation of Digital Bangladesh.

Software and IT services developed in Bangladesh are being provided to more than 80 countries of the world including USA, Europe, Canada and Australia, he said.

Hamid said exports in the IT sector have exceeded 1.3 billion US dollars, hoping that by 2025, the revenue earned from IT will exceed 5 billion and the contribution of software and ICT services to GDP will increase to 5%.

Keeping this goal in mind, the present government has set up 39 high-tech and software technology parks, IT training and incubation centers across the country, the president mentioned.

Regarding freelancing, he said that the young generation is becoming self-reliant through freelancing. “Our position is second in terms of the number of freelancers in the world,” he said.
There are 600,000 active freelancers in the country and identity cards are being provided to them for their professional excellence, he mentioned.