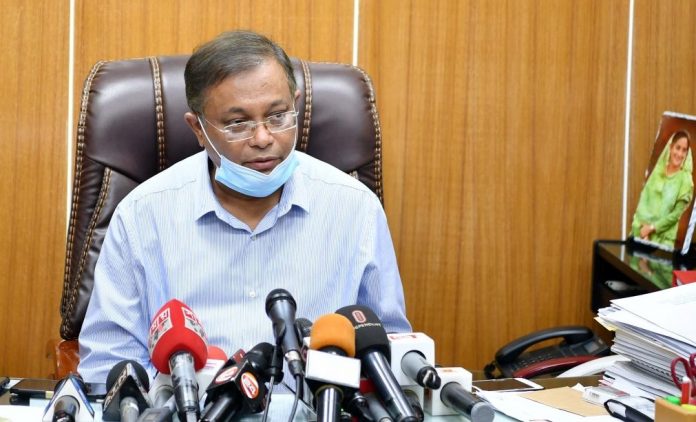 Climate vulnerable countries, including Bangladesh, have been struggling to cope with climate change impacts, the minister says

It is time for the developed countries to be more active in fulfilling their commitments to address climate change, Information and Broadcasting Minister Dr Hasan Mahmud has said.

He made the remarks while speaking at a meeting with Scottish parliamentarians Faisal Chowdhury and Sarah Boyak on Thursday afternoon (local time) on the sidelines of the ongoing the Conference of Parties (COP-26) in Glasgow of Scotland, according to a statement on Friday.

Press Minister of Bangladesh High Commission in London Md Ashequn Nabi Chowdhury was present on the occasion
At the meeting held in the Scottish Parliament, Hasan, also the Awami League joint general secretary, said although a few funds have been released from the Global Climate Fund for tackling the risks induced by climate change, no fund is being allocated for long-term climate adaptation.

That is why, he said, climate vulnerable countries, including Bangladesh, have been struggling to cope with the climate change impacts.
The information minister informed the Scottish parliamentarians that with local funding and under the leadership of Prime Minister Sheikh Hasina, the Bangladeshi scientists and researchers have been innovating drought-, flood-, and salinity-tolerant crop varieties to adapt to climate change.

Recalling the relations between Bangladesh and Scotland, Hasan hoped that the friendly-ties between the Scottish Parliament and the National Parliament of Bangladesh would be strengthened further.

In an interview after the meeting, the minister said they discussed how to form a friendship group between the Scottish Parliament and the Parliament of Bangladesh and various issued related to mutual interests.

At that time, Faisal Chowdhury lauded the overall progress of Bangladesh and its leading role in tackling climate change.

The minister is expected to return home on November 17 next after attending the global climate meet.
BSS