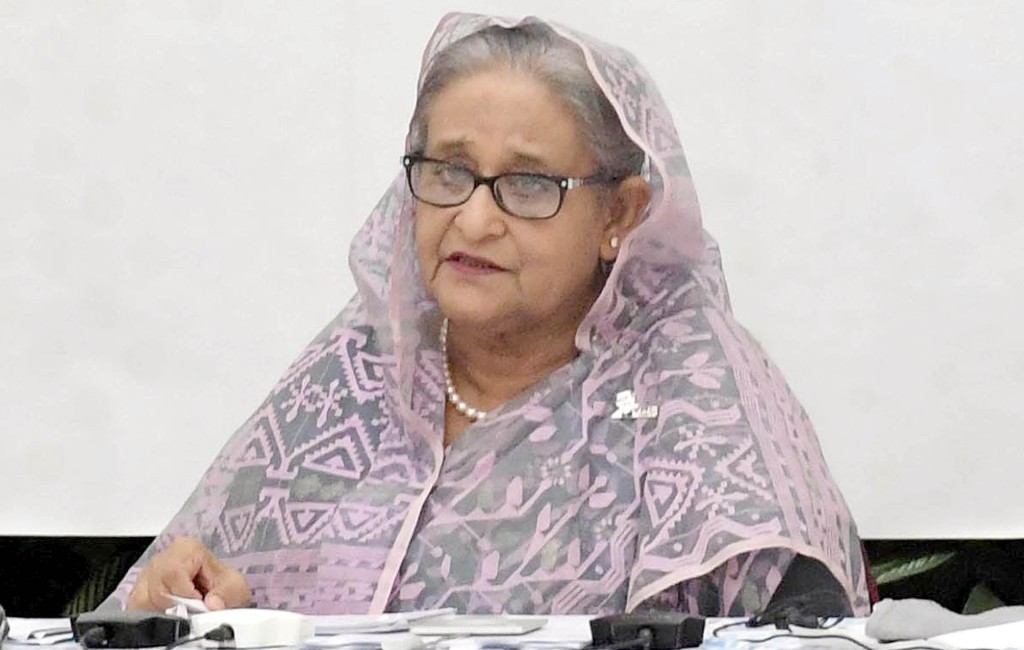 We have been able to take the country forward defying all the conspiracies,’ says the premier

Prime Minister Sheikh Hasina on Saturday said fugitive convict Tarique Rahman has been conspiring against Bangladesh’s advancement while her government has taken the country, confronting all the plots, to such a position that the world has to honour it.

Joining a civic reception in Paris virtually, she called upon Bangladeshi expatriates to invest in 100 special economic zones being set up across the country.

“Taique Rahman, who is a fugitive in the 10-truck arms haul and the August 21 grenade attack cases, has been continuing to hatch conspiracies while staying abroad,” she added.

Bangladeshi expatriates residing in France and other European countries also attended the reception.
The prime minister said: “We have been able to take the country forward and defied all the conspiracies.”

She also said that by following the footprints of Father of the Nation Bangabandhu Sheikh Mujibur Rahman, they have been able to transform Bangladesh into a developing nation.

“So, from now on, no one can neglect us. The world must honour us as we have taken our country to such a position,” she added.

The premier added that her government had to face many hurdles and conspiracies such as the BNP-Jamaat alliance’s arson attacks and attacks on her life, to take the country to today’s position.
Assuming office after 21 years, Sheikh Hasina said they have been working for the betterment of the country and its people while the BNP-Jamaat clique has only built their own fortune by making some quick bucks through initiating the culture of corruption and loan default.

Mentioning that her government has been constructing 100 special economic zones across Bangladesh, the prime minister called upon the expatriates to invest in them.

“The expatriates will be given special benefits if they invest in the economic zones,” she added.

Recalling the contribution of the expatriates to Bangladesh’s development, Sheikh Hasina said the non-resident Bangladeshis always remained beside the people during all democratic struggles and movements in the past.
She highlighted her government’s various initiatives to successfully face the Covid-19 pandemic by keeping the lives and livelihoods normal alongside running the wheels of the economy.

“All, including the common people, service holders, teachers and students are being vaccinated free of cost although many of the developed countries could not do it,” said the prime minister.

She reiterated her call to the countrymen to wear face masks to remain protected from the pandemic.

Speaking about the conspiracy against the country’s mega Padma Bridge project, the prime minister said that the World Bank had raised graft allegations against the project which was later proved baseless at the Canadian Federal Court.
She also said the firm stance of her government to construct the Padma Bridge with the country’s own finances has brightened Bangladesh’s image and dignity abroad.

Sheikh Hasina came down heavily on the post-1975 governments for their misdeeds, particularly the activities of military dictator Ziaur Rahman who came to power illegally violating the constitution and created an elite section in society to cling to power.

The prime minister said Ziaur Rahman had killed hundreds of military officials in the name of the trial, adding that the family members and their relatives even did not get their bodies.

On the other hand, Zia’s wife Begum Khaleda Zia was convicted in a corruption case for misappropriation of orphan’s money and their son Tarique Rahman was convicted in the 10-truck arms-haul and August 21 grenade attack cases, she added.
The Khaleda Zia government had sacked a military officer as he wanted to save an unexploded grenade as evidence while a police officer who unearthed the arms-haul case, was also axed from the job.”

She further said the BNP-Jamaat government had also killed a police official involved in the arms-haul case, adding that they had made the country a hub of illegal firearms smuggling.

About the international award introduced by Unesco after the name of Father of the Nation, she said: “It will encourage the youth talents from around the world to work on science and technology and research.”

“The award is a pride for the entire nation and the country,” she added.
BSS