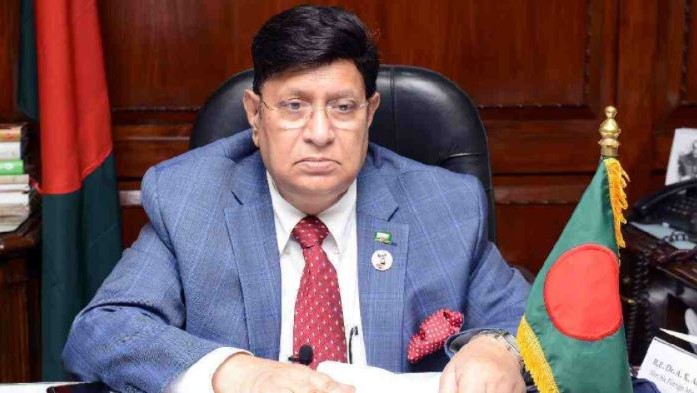 This will be discussed in the upcoming IORA COM meeting on Nov 17, says the state minister

Foreign Minister Dr AK Abdul Momen on Sunday said they want to see an open, free, peaceful and inclusive Indian Ocean instead of any single country’s dominance noting that many have different types of interests towards the Indian Ocean.

“Indian Ocean is a huge issue. We don’t want to see any unilateral dominance in the Indian Ocean,” he told reporters at a media briefing at his ministry.

Bangladesh will host the 21st Indian Ocean Rim Association (IORA) Council of Ministers’ (COM) meeting on November 17 as it takes up the IORA chairmanship for the first time in 24 years.

“Indo-Pacific Vision” will also come up for discussion.
IORA has six priority and two focus areas identified on the basis to promote sustained growth and balanced development in the Indian Ocean Region.

“We’ll try to focus on those issues,” Dr Momen said.

The 23rd Committee of Senior Officials (CSO) and its related meetings will be held on November 15-16 in a hybrid format (in-person & virtual).

The foreign minister said this is a great moment for Bangladesh and 12 ministers from 11 countries (two ministers from Tanzania) will be joining the IORA COM in person.
Indian Ocean is very important for trading. It’s also dangerous with some associated risks like cyclones, typhoons, tidal surges. So, it’s an essential meeting,” he added.

Dr Momen also said they are looking at the future through the ocean as there are many things to achieve together through partnership and dialogue.

Foreign Secretary Masud Bin Momen said through the IORA event, Bangladesh has got an opportunity to demonstrate that Bangladesh has been able to bring the Covid situation under control.

“It’s a testimony to the external world that Covid-19 is under control in Bangladesh and we’re getting back to normalcy,” he observed.

The foreign secretary mentioned Bangladesh will also host the Peace Conference on December 4-6 in person, keeping the option open for virtual joining too.
Rear Admiral (Retd) Md Khurshed Alam, secretary of Maritime Affairs Unit (MAU) at the Ministry of Foreign Affairs, said apart from the ministers, 82 representatives from member states will participate in it in person while many will join virtually.

The issues which will be discussed on November 15-16 and the decisions to be taken will be approved at the ministerial meeting.

He also said appointment of a secretary general of the IORA will also get approved at the ministerial meeting on November 17.

The secretary general is appointed by the Council of Ministers (COM) for a term of three years which is renewable for one additional term, from among the candidates nominated by the member states on the basis of qualification, experience and suitability as laid down in the staff regulations of the IORA Secretariat.
Khurshed Alam further said they want to take some programmes to share Bangladesh’s expertise with other countries and learn from other member States too. “We’ll show them practically our expertise in some areas like aquaculture and disaster management.”

He said the new IORA Action Plan 2022-27 will hopefully be approved this time, too.

Dr Momen said it is good news that many are looking at Bangladesh and Bangladesh is already a model in disaster management. “Partnership is more important than ever after we face Covid-19.”

A dozen of ministers representing IORA countries, including Minister for South Asia, the United Nations and the Commonwealth at the Foreign, Commonwealth & Development Office (FCDO) Lord Tariq Ahmad of Wimbledon will be visiting Bangladesh to attend the IORA event.
The IORA ministers will also meet Prime Minister Sheikh Hasina during their stay in Dhaka. “We’re working on that,” said the foreign minister.

British Minister Tariq Ahmad will deliver a keynote speech at a program titled “Bangladesh-UK: Partners in Progress” on Monday afternoon.

The talks will be held at the Foreign Service Academy and Foreign Secretary Masud Bin Momen will chair the event.

The British minister will also have a meeting with Foreign Minister Dr AK Abdul Momen during his stay in Dhaka, said an official.

Foreign ministers of Sri Lanka, Union of Comoros, Indonesia, South Africa and a Minister of Tanzania will also visit Bangladesh.

The Chairmanship of Bangladesh is to run from 2021-2023, with the new vice-chair, the Democratic Socialist Republic of Sri Lanka, and the United Arab Emirates now taking the position of the past chair.

The forthcoming ministers’ meeting will be preceded by the 23rd CSO meeting taking stock of the association’s progress, and to endorse the next IORA’s Action Plan (2022-2027).

Meanwhile, a Strategic Dialogue on the Impact of Covid-19 and perspectives of economic recovery in the Indian Ocean Region will be held on November 17.

Foreign Minister Dr Momen will host dinner in honour of the delegations to be here to attend IORA meetings.

The Indian Ocean Rim Association is an inter-governmental organization that was established on March 7, 1997.
The vision for IORA originated during a visit by late President Nelson Mandela of South Africa to India in 1995.