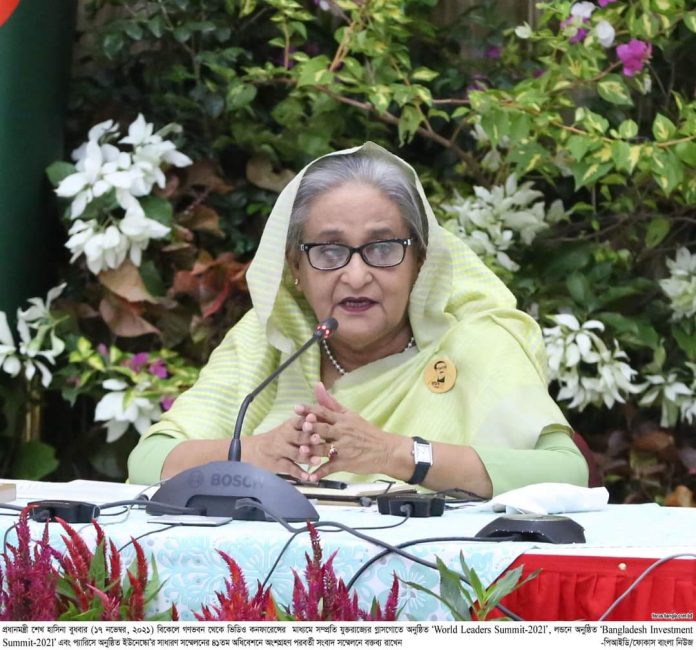 have done whatever I can for Khaleda Zia,’ says the premier

Prime Minister Sheikh Hasina said on Wednesday that the law would decide whether Khaleda Zia would be allowed to go abroad for medical treatment.

“I have done whatever I can for Khaleda Zia. Now the law will decide the next course of action [regarding Khaleda’s overseas treatment],” she said while answering queries from the journalists in a press conference arranged to brief media about her recent 14-day official visit to the UK and France.

Replying to a query about allowing Khaleda Zia to go abroad for treatment, she said that using her power, she has allowed Khaleda Zia to stay home instead of jail and receive the required treatment within the country.
The premier briefed the media at the Ganabhaban end while the journalists from different media questioned her from both her official residence and the Prime Minister’s (PMO)
Sheikh Hasina asked the journalists how they could expect from her that Khaleda Zia would be sent abroad for treatment as the BNP chairperson made several attempts on her life, referring to the August 21, 2004 grenade attacks, planting of bombs at Kotalipara in Gopalganj and giving prestigious postings to the killers of Bangabandhu and his family members.

The prime minister said Khaleda Zia made convicted killers Rashid leader of the opposition in parliament and gave another killer Pasha posthumous promotion to give his family all the job benefits.

She added that Khaleda Zia even did not allow the Awami League to speak about the August 21 grenade attack in the parliament though 22 leaders and activists were killed and many others injured.
The premier questioned the journalist what they would do if anyone made attempts on their lives or killed their family members, saying: “Would you receive them with garland?”

She told the journalists who asked the questions that they must be ashamed for asking the question.

Despite those facts, the prime minister said, they have allowed Khaleda Zia to stay home as they are human beings.

“Using whatever (authority) is in my hand, I have managed to keep Khaleda Zia at her home,” she said.