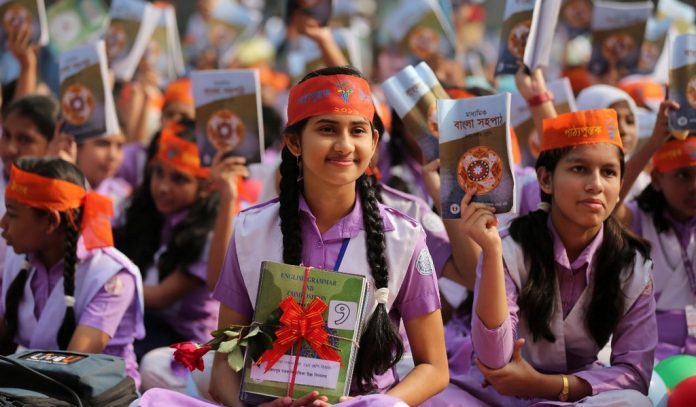 The distribution of free textbooks to students of primary and secondary levels for the 2022 academic year may not happen on the dot. Press owners say they are behind schedule due to the delay in the National Curriculum and Textbook Board’s (NCTB) decision-making.

The NCTB, on the other hand, is confident of receiving the textbooks in time and distributing them among students from January 1, 2022.

Owing to the workload and the aforementioned delay, many press owners said it might take them till February to get their work done, while some others saidthey might need till June.

They said they might finish printing 70% of primary-level textbooks and 50% of secondary-level ones by February 2022, and indeed might not even start printing books for the pre-primary level before December 2021.

The NCTB floated tenders for the job three times since March 7 and printers received work permits on November 9. Notably, a company based outside Dhaka was awarded the highest volume of work and got the work order on September 20. Other press owners alleged that the NCTB had favoured this particular printer for some reason.

For its part, the NCTB said it had floated the tenders several times to prevent a syndication of press owners, adding that press owners managing to deliver the books by January 1 next year would be in its good books and get priority in printing books in 2023.
The education ministry and the NCTB intend to deploy teams to ensure that all presses do their work according to the agreed terms and conditions, maintaining deadlines.

Mohammad Zahurul Islam, general secretary of Printing Industries Association of Bangladesh, told Dhaka Tribune: “We have only 70-80 days to finish our work. The deadline for finishing printing secondary-level books is February 27, 2021.”

“If the authorities want to distribute the books from January 1, they should be delivered by mid-December. [But] the NCTB dragged the tender process,” he added.

The parties concerned reached an agreement to print 10.4 million books on November 9 and 11.1 million the previous day.
We have not started printing in full swing yet,” Zahurul said.

Meanwhile, the agreement on primary-level textbooks was signed in October. These are supposed to be delivered on time.

In addition, some books for second, third and fourth grades are being printed in India.

Multiple press owners said that according to the terms of the current tender, the books must be delivered to the schools by the first week of February 2022. This means that not all students will receive new books on January 1, the national textbook festival day.

In case of a delay, they said, press owners would get another 28 days along with a fine to be paid according to the law. As a result, printing is most likely to end in March next year.

Sounding a note of optimism, NCTB Chairman Prof Narayan Chandra Saha said the books would hopefully arrive on schedule. “Some 15 million books have already been printed,” he added.
The re-tenders were floated as the press owners did not want to accept our terms and conditions. We started the process in September and will finish it by December,” he said.

Education Minister Dipu Moni had held out the assurance that students would receive their new textbooks in time next year.

A total of 41,655,226 students are supposed to get the free textbooks in the upcoming academic year, according to NCTB data.

Eight special parameters were set for printing “Amar Boi” for pre-primary pupils. In them, gloss (glitter) was defined as “40 glossy papers”. This was not the case in the last ten years as these books were printed on white glossy printing paper. This time around, conditions like ensuring 80% thickness, 85% brightness and using wood-free pulp are in place.
We used art paper or art cards last year. This year the NCTB did not want to permit its use but the chief of the Directorate of Primary Education gave his approval,” said Mohammad, proprietor of RR Printing and Packaging.

“Printers could not find the requisite paper in the domestic market, as a result of which not a single book has been printed yet,” he added.

The NCTB had made a mistake in deciding the quality of the paper with unrealistic conditions, he complained.

Meanwhile, NCTB officials said they had already removed some conditions from the tender. The tender would be open by December 8 again and the contract would be awarded to the deserving press, they said.

NCTB Chairman Narayan Chandra Saha said pre-primary-level students would get their books by January regardless. A total of 6,679,204 books will be delivered.
Printing order for 35 million books to one company

The NCTB awarded the job of printing 35 million books to the Choumuhani-based Agrani Printing Press on September 20, much before other presses.

Some printers had filed a case against Agrani saying the printing press was not capable of carrying out the job. However, the High Court dismissed the case by giving an order in Agrani’s favour on November 9.

Printers said Agrani had 25 printing machines but according to the work order it should have 70 of them. Agrani did not have the capacity to print the ordered number of books, and for that, other owners would suffer, they added.

However, Md Kaosaruzzaman Rubel, proprietor of Agrani Printing Press and executive member of Printing Industries Association of Bangladesh, claimed the firm had got the work by fulfilling all terms and conditions.
Ask the NCTB about our work progress. I will not comment on it,” he added.

Meanwhile, the NCTB chairman said the board would not have given Agrani the job if it did not have the capacity to complete it.