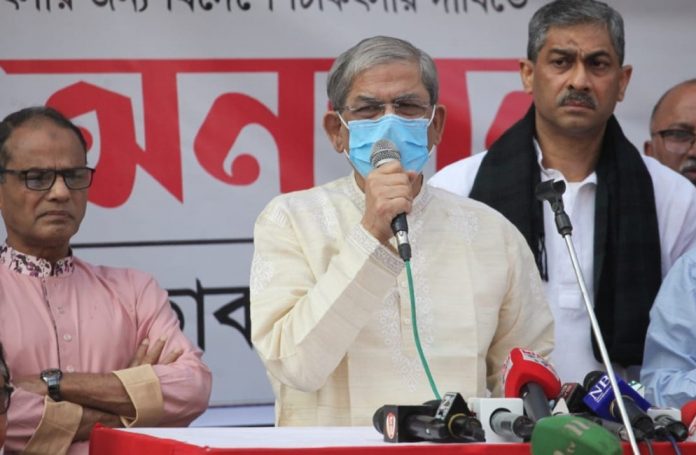 Khaleda Zia is fighting for life because of the political vengeance of the prime minister, says party leader

BNP Secretary General Mirza Fakhrul Islam Alamgir on Saturday said their party leaders and activists are ready to make any sacrifice on the streets to ensure that party chief Khaleda Zia can receive advanced treatment abroad.

“Khaleda Zia is inseparably linked with the soil of this country. We must free our leader and ensure her treatment abroad. We are ready to make any sacrifice for it,” he said.

Speaking at a mass hunger strike program, the BNP leader also threatened to launch a strong movement to oust the government if their demand is not met immediately.

“From this program, we would like to ask the government to take steps to immediately release [Khaleda] and send her abroad for treatment. Or else, the movement that began [Saturday] through the mass hunger strike will ensure your fall,” Fakhrul said.

Fakhrul, party leaders and activists also vowed that they would not stop the movement unless Khaleda is completely freed and sent abroad for treatment.

As part of the countrywide program, hundreds of leaders and activists of the party and its associate bodies began the hunger strike in front of their Nayapaltan central office at 9am.

Fakhrul said Khaleda is so sick that she is now in a condition between death and life.
We talked to doctors, including those from abroad. They said she (Khaleda) has already been provided with the treatments that are possible in Bangladesh. She won’t recover if she is not given treatment at an advanced centre abroad for some critical problems.”

He also said the BNP chief’s family submitted an application seeking permission to send her abroad for the treatment, but the government turned it down. “Moreover, the leader of the house talked about the matter in such language that is not acceptable in any way. The law minister also resorted to lies.”

The BNP leader mentioned the government has the complete authority to allow the BNP chief to go abroad as per section 401 of the Criminal Code of Procedure (CrPC). “It’s their responsibility to take steps for her treatment outside the country.”
He alleged that the government is the barrier to the release of Khaleda Zia and her treatment abroad, not the law. “Khaleda Zia is fighting for life because of the political vengeance of the prime minister.”

The BNP leader called upon the government to accept their party’s demand for Khaleda’s treatment, shunning foul politics.

Jatiya Samajtantrik Dal (JSD) President ASM Abdur Rob said the government has the scope to send Khaleda Zia abroad for treatment. “I was sentenced to a life term in jail. But Ziaur Rahman sent me to Germany in 1979 from jail and I stayed there for a year.”

Nagorik Oikya convener Mahmudur Rahman Manna also slammed the government for not allowing ailing Khaleda to go abroad on humanitarian grounds.
He suggested BNP to continue the movement, braving all the barriers to ousting the government.

Leaders of BNP’s alliance partners of the Jatiya Oikyafront and the 20-party also expressed solidarity with the party by joining the program.
UNB