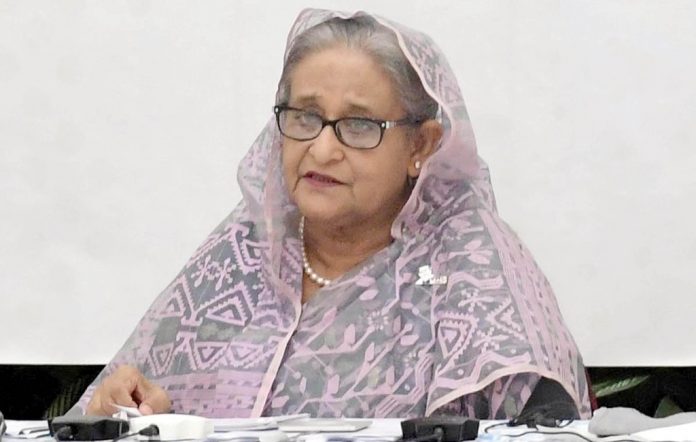 She says people forming new parties is essential for the country

Prime Minister Sheikh Hasina on Friday said no new political party will face any obstruction in waging a movement in the country.

“If anyone (group) wants to form a party they can do it because there’s a multiparty democracy here. There’ll be no obstruction here,” she said while addressing a meeting of the Awami League Central Working Committee at her official residence Ganabhaban.

But they will not be allowed to damage the lives and property of the people, the premier warned.

Sheikh Hasina said BNP-Jamaat is always hyperactive to make every development activity of the government controversial. “No matter how much good work we do, they come up with an attempt to create a controversy. The BNP-Jamaat is hyperactive here,” she said.
Noting that some new parties are being formed, the premier said she had spoken to the police chief about it on Thursday. “Let them form parties and work because it’s essential for Bangladesh,” she said.

“If they want to bring out processions, they can do so. Why do we hinder their processions? They can do all sorts of movements, but they can’t burn people to death and cause any damage to any life and property. We’ll have to take care of it,” she said.

Sheikh Hasina said the Awami League government ensured development in every sector of the country, including education and health.

She said Bangladesh attained the overall development significantly and rural people are also being benefited with touch of that development.
Today, 99.99% people have come under electricity coverage.

“As the wheel of development is running, Bangladesh achieved the status of a developing country despite false propaganda being carried out unnecessarily.

“Even some people of our country carry out propaganda, saying that it’s not right to say that Bangladesh has graduated to a developing country. It’s most unfortunate,” said the prime minister.

The ruling party chief asked every member of the Central Working Committee to work on countering the propaganda.

“Every member of our working committee will have to remain alert about them – who they are, what their objectives are, and what they want to do. The Awami League members need to know these, protest these and do whatever necessary to counter these [propaganda],” she added.
Citing various incidents, including the August 21 gruesome grenade attack, the prime minister said Khaleda Zia and her allies always tried to wipe out the name and sign of the Awami League.

“I’m always Khaleda Zia’s target,” she said, adding that Khaleda Zia had commented that Sheikh Hasina would never be the opposition leader let alone the prime minister and then a bomb was planted in Kotalipara of Gopalganj.

Khaleda had remarked that AL would never be able to come to power in 100 years and then the gruesome August 21 grenade attack was launched, the premier said. “We should not forget these remarks.”

When AL came in power, Hasina said, it did not resort to repressive acts against them. “I believe in democracy and the vote of people,” she said.

Turning to the misrules unleashed by the BNP regime, the prime minister said some people are there in the country who do not think about the thousands of offences committed by some particular people as crimes.
They talk against corruption, but speak in favor of a person convicted on graft charges. They’re vocal against terrorism and militancy, but utter no single word against those who are involved in terrorism and militancy as well as convicted in the 10-truck arm-haul case,” Hasina said.

“We’re noticing a strange situation. They find all faults in Awami League,” bemoaned the prime minister.

The AL president asked her party’s every leader and activist to remind the intellectual people about the misdeeds of the BNP regime.

“Still, some of our people staying abroad have been carrying out propaganda against our works, no matter how good they are. So, every leader and activist of AL should remind people about their misdeeds so that our intellectual persons can acquire some knowledge and know about the real situation,” she said.
Sheikh Hasina said some of them now sit in meetings to find out how Awami League could be ousted from power. “What’s the fault of Awami League? Is it Awami League’s fault to develop the country?” she said.

Pointing to the recent communal attacks, the premier said they tried to create instability in the country, but the government has been able to control it by taking timely steps.

Despite being a Muslim, the offender defamed the holy Quran by keeping it in a temple, she mentioned.

The identity of those who were behind these were also dug out through investigations, Hasina said, adding that she would not describe the details as it is a sub-judice matter. “Why will people vote for BNP when its leader is a convicted fugitive?”
Hasina said people vote for a party with a hope that it would come to power and serve them. “But Tarique Zia leads a lavish life abroad. One can ask him what his sources of income are!”