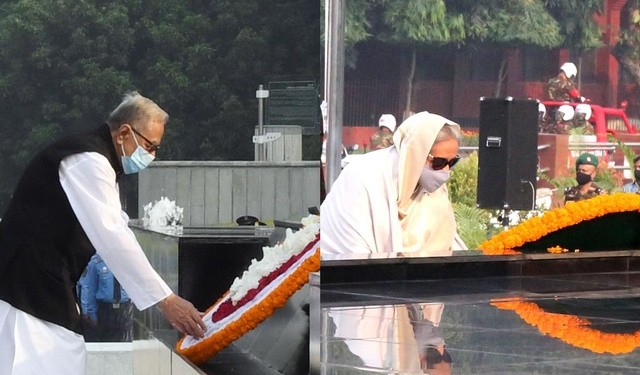 President Md Abdul Hamid and Prime Minister Sheikh Hasina have paid tribute to the members of the army, navy and air force martyred during the Liberation War at the Shikha Anirban, or Eternal Flame, to mark Armed Forces Day on Sunday.
Bangladesh observes Nov 21 as Armed Forces Day, signifying the day in 1971, when the Armed Forces – the army, the navy and the air force — launched a coordinated offensive against invading Pakistani forces.

The heads of the three agencies and the principal staff officer of the Armed Forces Division received the president and the prime minister, who is also the Minister of Defence, at the Dhaka Cantonment.

After the president, Hasina, who is the head of the government, laid a wreath at the Eternal Flame and spent moments in silence to honour the soldiers who sacrificed their lives for Bangladesh’s liberation. She was given a guard of honour. Later, she also signed the visitor’s book.

On behalf of the prime minister, Minister of Liberation War Affairs AKM Mozammel Haque awarded five army members, two navy staff and an air force member with the Shantikalin Padak.
A live programme will be televised on the Bangladesh Television in Dhaka Cantonment at 4 pm on Sunday to mark the day. Hasina is set to attend the programme via video link.

UNITED EFFORTS OF ALL

The independence gained through the united efforts of the people of this country can never be in vain, Hasina said during the event.

“In 1971 the people of this country gave everything they could to support the Awami League and the Father of the Nation Sheikh Mujibur Rahman. Our independence was gained through our collective efforts and it can never be in vain. And so, we will build Bangladesh into a developed and prosperous nation. Bangladesh has gained the respect of the world. We will maintain this respect as we move forward.”

The Awami League government’ goal is just that, she said: “We will, Inshallah, build a developed and prosperous Golden Bangla.”

The prime minister also reminisced about the grand history of Armed Forces Day.
On this Armed Forces Day, I want no impediments to this nation’s progress. Bangladesh should gain the respect of the entire world. So that, wherever a Bangladeshi travels, they can hold their head high and say with pride that we are a victorious nation – a developed nation.”

The government has launched several initiatives to train the Armed Forces and provide training for other professions as well, she said.

Hasina also spoke of the assassination of Bangabandhu and the years that followed.

“After the killing of the Father of the Nation, there came a time when people were afraid to identify themselves as Liberation War fighters. The history of the Liberation War was distorted. There was an attempt to impose a fictitious history. I do not know if any other nation in the world has faced such a thing. But such a thing, such a disgusting thing, happened here.”

Bangabandhu wanted to build a nation ‘from the land and its people’, she said.

“When we came to government, that was our goal. We would develop this country. The honour we earned in our victory during the 1971 Liberation War was lost on Aug 15, 1975, with the murder of the Father of the Nation. But we will regain that glory and realise his ideals.”