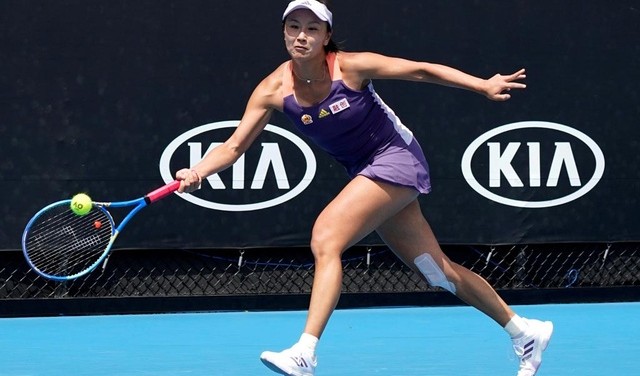 The women’s professional tennis tour announced Wednesday that it was immediately suspending all tournaments in China, including Hong Kong, in response to the disappearance from public life of the tennis star Peng Shuai after she accused a top Communist Party leader of sexual assault.
With the move, the Women’s Tennis Association became the only major sports organisation to push back against China’s increasingly authoritarian government. Women’s tennis officials made the decision after they were unable to speak directly with Peng after she accused Zhang Gaoli, a former vice premier of China, in social media posts that were quickly deleted.

The Chinese government quickly removed all mentions of Peng’s accusation, and coverage of Peng from news media outside China has been censored. She has not been seen in public except in the company of government officials in more than two weeks.

Peng, 35, a Grand Slam doubles champion and three-time Olympian, resurfaced late last month in a series of appearances with Chinese officials, including in a video conference with Thomas Bach, president of the International Olympic Committee, which will bring the Winter Games to Beijing in February.

“While we now know where Peng is, I have serious doubts that she is free, safe and not subject to censorship, coercion and intimidation,” Steve Simon, the chief executive of the Women’s Tennis Association, said in a statement.

“If powerful people can suppress the voices of women and sweep allegations of sexual assault under the rug, then the basis on which the WTA was founded — equality for women — would suffer an immense setback,” he added. “I will not and cannot let that happen to the WTA and its players.”

The suspension comes just two months before the start of an Olympics that makes Beijing the first city to host both the summer and winter Games. The IOC has not indicated that the Peng controversy would affect the Games, with Richard W Pound, a Canadian lawyer and the organisation’s longest-serving member, saying that the committee prefers “quiet and discreet diplomacy.”

No other sports organisation has followed the WTA’s lead.

“We cannot walk away from issues related to sexual assault,” Simon told The Times in an interview Wednesday night. “If we do that we are telling the world that is OK and it’s not important. That is what this is about.”

“It’s the right move and I’m so proud of the WTA for taking it,” Martina Navratilova, the former champion, said. “Now we are just going to have to see if the other sports, especially the ATP, will follow.”
The governing body for the men’s tour, the Association of Tennis Professionals, asked for an investigation into Peng’s safety, but has not suggested it would boycott China. And on Tuesday, World Athletics, the governing body for track and field, affirmed that it would hold its relay championships in Guangzhou in 2023. The organisation is led by Sebastian Coe, a leading member of the IOC.

China is a vast market that has provided a huge opportunity for growth among sports organisations, including Premier League soccer, the National Basketball Association, and professional tennis and golf. Doing business in China has become both lucrative and complicated in recent years as the country’s government has cracked down on free speech and political protest. Its treatment of Muslim minorities has been deemed genocide by the United States and lawmakers in several nations.

Michael Lynch, who led the sports marketing division for Visa during his 16-year tenure at the company, said he expected that tennis would not be the only sport to re-examine its business in China because of the treatment of Peng. “Let’s hope this is not considered a female problem,” Lynch said. “They are all athletes. It doesn’t matter sex or gender. If there is more pressure that needs to be applied, sports will support one another. What we saw with Black Lives Matter is this is about human rights and everyone is coming to the table and supporting each other.”

Women’s tennis stands to lose hundreds of millions of dollars in the coming years by pulling out of China. The tour has a 10-year deal to hold its season-ending tournament in Shenzhen, where organisers committed to some $150 million in prize money and millions more on tennis development in the country. The organisation also holds eight other tournaments in the country.

“I don’t see how I can ask our athletes to compete there when Peng Shuai is not allowed to communicate freely and has seemingly been pressured to contradict her allegation of sexual assault,” Simon said. “Given the current state of affairs, I am also greatly concerned about the risks that all of our players and staff could face if we were to hold events in China in 2022.”

Simon said that women’s tennis would not return to China until its officials could speak to Peng without government interference and a full investigation into her assault accusations could be conducted. “China’s leaders have left the WTA with no choice.”

Peng accused Zhang, 75, of sexually assaulting her at his home three years ago. She also described having had an on-and-off consensual relationship with Zhang.

Then she quickly dropped out of public life. As demands for an inquiry grew louder, China’s state-owned broadcaster released a message that it claimed was from Peng, recanting her accusations.

“Hello everyone this is Peng Shuai,” it stated before calling her initial accusation of sexual assault untrue. “I’m not missing, nor am I unsafe. I’ve been resting at home and everything is fine. Thank you again for caring about me.”

The message, which few believed was actually from Peng herself, only raised concerns further, as did additional photos and videos of her that began to appear — all from sources in China’s government-controlled media
Then, 10 days ago, with pressure mounting on the International Olympic Committee, the organisation released pictures of Bach holding his video call with Peng and Emma Terho, who leads the IOC athletes’ commission.

However, a friend of Peng assisted her with her English, according to an Olympic official, even though Peng had become proficient in the language over her 15-year professional tennis career. Li Lingwei, an Olympic Committee member and Chinese Tennis Federation official, also took part in the conversation.

On Twitter, the former champion and activist Billie Jean King said that the WTA was “on the right side of history.” She added, “This is another reason why women’s tennis is the leader in women’s sports.”

Serena Williams has been vocal about the need for Peng to be able to speak freely, as have other major figures in tennis including Navratilova, Naomi Osaka and Patrick McEnroe, the ESPN commentator and former player.

For the International Olympic Committee, the timing could not be worse. The organisation is coming off staging the postponed Summer Games in Tokyo, where roughly 80% of the country’s population was opposed to the event taking place, according to polling in the weeks before the opening ceremony.

Now it is taking its marquee winter event to China, a move that many critics are now comparing to one of the darkest chapters in the history of the modern Olympics — the staging of the 1936 Summer Games in Berlin, an event that Adolf Hitler leveraged as propaganda for his fascist Nazi rule of Germany.

The question now is whether other sports organisations will follow the lead of women’s tennis, or whether they will resist giving up the potential riches of the Chinese market. The National Hockey League, for example, which plans to stop its season in February so its stars can participate in the Olympic hockey tournament, has been largely silent on the matter.

Terrence Burns, an international sports consultant who worked with the Chinese on its bid for the 2008 Olympics, said China has shown that regardless of what sports leagues and organisations do, the government is not likely to change its ways to accommodate what it views as the standards of the West.

“For a while, global sports was a means for places like China to promote their brand, to make a statement on a global stage,” Burns said. “China is past that now.”