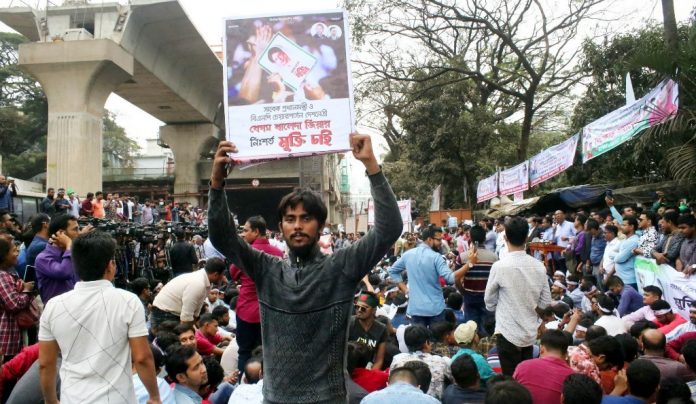 The BNP on Saturday threatened to launch a movement to topple the government if it does not immediately allow party chief Khaleda Zia to travel abroad for advanced medical treatment.

“We would like to clearly ask the government to free our leader Khaleda Zia and take steps for sending her abroad for treatment without buying further time,” BNP Secretary General Mirza Fakhrul Islam Alamgir told a rally.

Otherwise, he said, people will not forgive the government. “A movement to ensure your [the government’s] fall will begin and a pro-people government will be installed removing you from power.”
The BNP’s student affiliate, Jatiyatabadi Chhatra Dal arranged rally in front of the Jatiya Press Club, demanding Khaleda’s treatment abroad as she was diagnosed with liver cirrhosis.

Fakhrul said the government is not willing to give Khaleda permission to go to any advanced medical centre overseas for treatment as it thinks their barrier to staying in power will be removed if she dies.

“You people rest assured that won’t happen. They thought BNP would have vanished through the killing of Ziaur Rahman. It didn’t happen. Khaleda Zia has rightly chosen her successor, our acting chairman Tarique Rahman, and the party is moving forward under his leadership,” the BNP secretary general said.
Awami League’s existence still remains intact as Khaleda Zia is alive,” Fakhrul said, adding Khaleda must be brought back to politics for restoring democracy, people’s lost rights and establishing good governance in the country.

Recalling Khaleda Zia’s contributions to the country and her long struggle for democracy, he said there is no other living leader in Bangladesh who made such huge sacrifices like Khaleda.

The BNP leader said many Chhatra Dal leaders have been subjected to enforced disappearance, killing and repression under the rule of the current government. “The students and Chhatra Dal wake up again to restore people’s democratic rights, protect the country’s independence and sovereignty. Our leader Khaleda Zia’s treatment abroad must be ensured through the movement.”
He called upon the Chhatra Dal leaders and activists to get ready for making any type of sacrifice to make their current movement a success.

Khaleda, a 76-year-old former prime minister, has been receiving treatment at Evercare Hospital for various health complications since November 13.

The BNP chief’s medical board members on November 28 said she immediately needs to go abroad for better treatment as she was diagnosed with liver cirrhosis.

On behalf of her family, Khaleda’s younger brother, Shamim Iskander, submitted an application to the Home Ministry on November 11 seeking permission to take her abroad for treatment.

However, Law Minister Anisul Huq said the government will consider Khaleda Zia’s appeal if she submits a fresh petition after returning to jail.
UNB