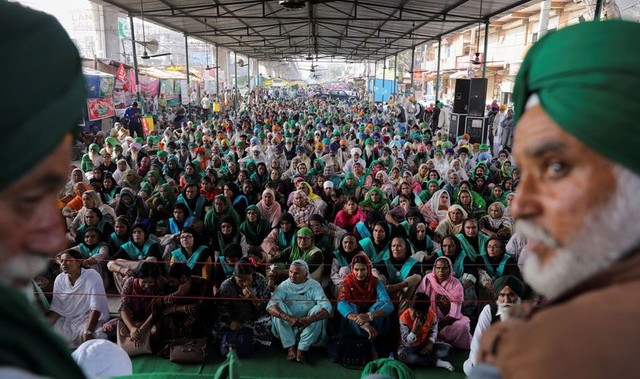 Indian farmers called off a year-long protest on Thursday after the government conceded a clutch of demands, including assurances to consider guaranteed prices for all produce, instead of just rice and wheat, union leaders said.
The move comes after Prime Minister Narendra Modi said last month he would roll back three farm laws, seeking to end the longest-running farmers’ protest that galvanised millions of growers who remained resolute in opposing the legislation.

Despite the government’s climbdown, thousands of farmers had continued to camp out on major highways leading to New Delhi to press for other demands such as the guaranteed prices, as well as for legal action against protesters to be dropped.

“We have received a letter from the government which has conceded to our requests,” said Balbir Singh Rajewal, a senior farm union leader.

Farmers’ leaders would meet on Jan. 15 to review progress on the government’s assurances, Rajewal told a news conference.

“We will resume our protests if the government moves away from the assurances,” said Gurnam Singh Charuni, another farmers’ leader.
The government will set up a panel of growers and government officials to find ways of ensuring Minimum Support Prices (MSP), as the guaranteed rates are called, for all farm produce, according to the letter seen by Reuters.

The government now buys mainly rice and wheat at such guaranteed prices, benefiting barely 6 percent of India’s millions of farmers.

Farmers’ outstanding demands included retracting legal cases filed against the protesting growers and compensation for the families of those who died during the protest.

State administrations have agreed to the demands, according to the government letter addressed to farm union leaders.
Farmers had also asked the government to withdraw a draft of a proposed electricity bill, which they feared would lead to state governments withdrawing their right to free or subsidised power, used mainly for irrigation.

The government will discuss the draft with farmers.

Growers had also called for dropping fines and other penalties for burning crop waste, a major source of pollution, and the government has assured farmers that they would be not be held criminally liable for crop waste burning.

“Since the government has addressed every possible concern of farmers, there was hardly any justification for their agitation,” said a government official who didn’t wish to be named in line with official policy.

After calling off the protest, some farmers started removing makeshift tents and began loading their belongings into trucks and tractor trolleys.

While Modi’s retreat has cheered farmers, economists fear that the repeal of the laws aimed at deregulating produce markets will starve the farm sector of much-needed private investment and saddle the government with budget-sapping subsidies for years.
Reuters