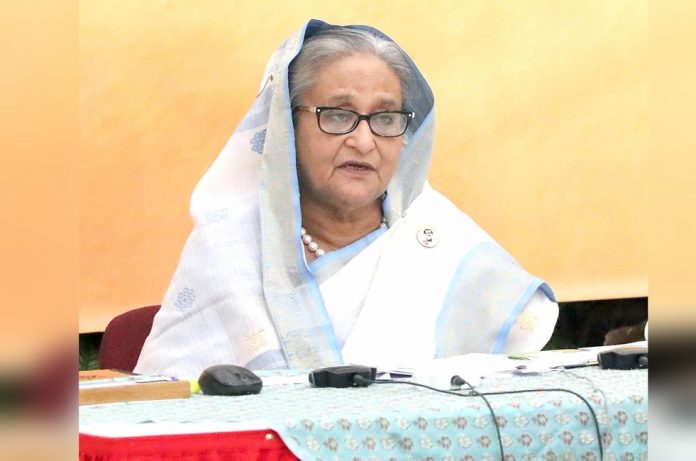 Women have to overcome every obstacle that appears before them, says Sheikh Hasina

“Once you move forward breaking through this stalemate, there’ll be no more obstacles. And in Islam, girls have been given rights… equal rights (for men and women) are there. Even then, such obstacles appear and will appear in our country. But we’ve to overcome these obstacles and move forward,” she said.

The prime minister was addressing the Begum Rokeya Padak 2021 award giving ceremony and celebrations of Begum Rokeya Day 2021, joining it virtually from her official residence Ganabhaban.
The Women and Children Affairs Ministry arranged the program at the city’s Osmani Smriti Auditorium, marking the 141th birth and the 89th death anniversary of Begum Rokeya Shakhawat Hossain, a pioneer of women’s rights in the subcontinent.

Describing Begum Rokeya as a model for women, the prime minister said: “If she had not lit the light of education by breaking the social stalemate (for women), we wouldn’t have been able to go forward so far today. She showed us the path. She made us move forward on the path of light.”

Sheikh Hasina said her government has largely been able to fulfil the dream of Begum Rokeya.

She, however, said the thing that hurts her the most is violence against women. Though the government has enacted laws against rape, women’s repression and domestic violence, it is essential to change the mindset of men to stop violence against women, she said.
We’ve to change our mentality and bring changes in our minds. Here trust is the most important thing. We’ve to believe that women are not just objects of enjoyment, women are co-fighters and co-partners, and they have to move forward equally and be given equal rights,” she said.

Five eminent women personalities were honoured with the prestigious Begum Rokeya Padak 2021 for their outstanding contributions to women empowerment and social development.

On behalf of the prime minister, State Minister for Women and Children Affairs Fazilatun Nessa Indira handed over the medals and certificates to the recipients and their relatives.

Spelling out the government’s measures taken for women empowerment, the prime minister said she had taken some steps for women’s economic freedom after forming the government in 1996.

She said her government made women’s education free and kept 60% posts of teachers reserved in primary schools for women. Following the steps, many parents did not prevent their girls from continuing their education, she said.

When the government introduced women’s football in the country, it faced many obstacles, the prime minister said.

“Our girls are now working in many risky places. They’re also operating fighter planes. So, Girls are no longer lagging behind in any area. The biggest thing is that women can do better than men in some cases,” she said.

Sheikh Hasina urged all to pray for her daughter Saima Wazed Putul, a globally renowned autism activist, on her birthday on Thursday.
unb