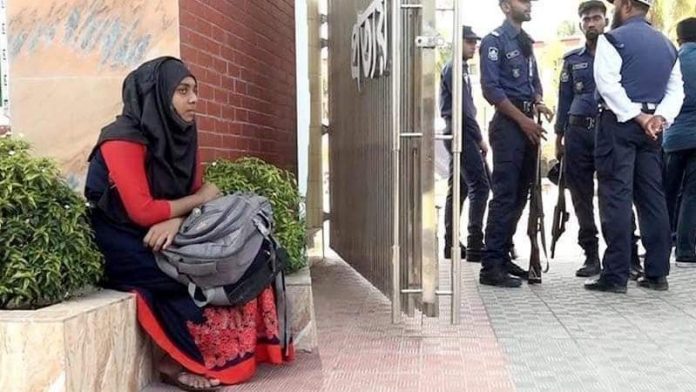 Aspiya Islam Kajal, whose recruitment as a police constable is stuck up by a regulation, has sought the intervention of the Prime Minister Sheikh Hasina.

Though Aspiya successfully went through all tests needed for a trainee constable, she cannot join as her family landless and has no permanent address. A permanent address of the candidate is needed to get a job in police department as per the regulation.

Her mother Jharna Begum said: “I have raised my daughter with a lot of effort, but she is not getting the job as we are landless here. Now we are seeking help from the prime minister as citizens of the country.

“Give my daughter the job anyway.”
Barisal Range DIG SM Akhtaruzzaman also hoped that she might soon get the job if the higher authorities intervened.

He, however, did not give any official statement on the issue of Aspiya’s requirement as he was not in-charge of the recruitment. He said the recruits for the post of trainee recruit constables are under the police superintendent of the district.

The DIG later gave a status on his Facebook profile on Thursday afternoon when the issue of Aspiya came into discussion through social and mass media.

In that post, he mentioned a report regarding Aspiya’s problem of not getting a job in the police due to lack of land. He said the issue has gone viral on social media and the tide is on Aspiya’s side but those who are aware of the provisions of government service are not able to take her side.
Thanking the people who brought the issue of Aspiya on social media, he said that he would be very happy if the girl gets the job.

Aspiya said: “I have passed every exam on my own merits. But only because we don’t own a land can’t I have the job. It has been said in the recruitment circular that qualified persons will be appointed. I have passed all the exams based on merit. Then why not give me the job?

She said the prime minister is working to establish a developed Bangladesh. “I don’t think it is right that the deserving people will not get job only because of not owning a piece of land. I am seeking PM’s intervention in the process,” she said.

According to her national identity card (NID), Aspiya is a resident of Matabbar Bari of Khunna Gobindpur village in Boro Jalia union of Hijla in Barisal.
According to the locals, Aspiya’s father came from Charfason of Bhola district 25-30 years ago and started living in Hijla upazila. He had a business.

Jhantu Bepari, a Union Parishad member of ward No 3 of Boro Jalia union, said: “I have known Aspiya since her childhood. Her father was an honest man. But 5-6 years ago, he died of a stroke. After that the family became helpless.”

He said: “Aspiya’s father Shafiqul talked to me and decided to buy land in this area to build a house. We even liked the land. But all of a sudden, he died.”

Jhantu Bepari further said that considering the humanitarian aspect, Aspiya should be given the job. After all, she is a citizen of this country.

According to the notification, Aspiya Islam applied from Hijla. She passed all the stages of the physical fitness test and written test.

But on Wednesday, during police verification, Hijla police station SI Mohammad Abbas submitted a report stating that Aspiya did not have permanent address in Barisal district