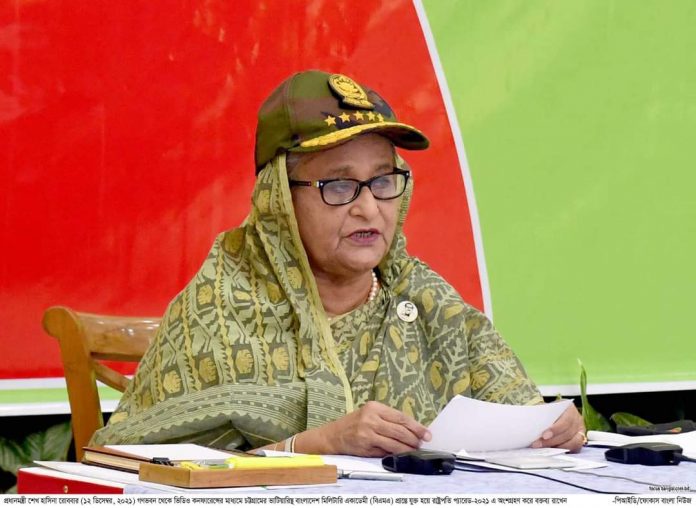 Stand by the people of the country, the prime minister tells newly-commissioned army officers

Prime Minister Sheikh Hasina on Sunday said Bangladesh has attained all capabilities to protect its independence and sovereignty if it is attacked by any external aggressor and enemy.

“We believe in peace, the Father of the Nation has given us the foreign policy ‘Friendship to all, malice to none’, we believe in that foreign policy, but if we’re attacked by enemies from outside, we’ve attained our capabilities to protect our independence and sovereignty,” she said.

The prime minister was addressing the President Parade 2021 of the 81st BMA Long Course at Bangladesh Military Academy at Bhatiari in Chattogram, joining it virtually from her official residence Ganobhaban.
She asked the new cadets to devote themselves towards protecting the independence and sovereignty of the country as their prime task, if needed the highest sacrifice.

Extending her best wishes and greetings to all the new officers on this auspicious occasion of passing out, she said by taking oath today they are entrusted with the sacred duty of defending the great independence and sovereignty of the motherland.

“You’ve to remain alert and ready always to fulfil this responsibility. You’ll have to remain beside the people of the country… you’ll have to perform your duties to meet all the necessities of people and share happiness and sorrows equally,” she said.

The prime minister asked them to uphold the spirit of the independence and put it above everything as this independence has come in lieu of the blood of millions of martyrs. “You’ve to inspire yourselves and instil the spirit of independence in you.”
Mentioning that ”Bangabandhu Complex” has been constructed at the BMA with all kinds of sophisticated facilities for internal training of cadets, she said: “I hope that this modern training system will play a pivotal role in building a trained and modern army.”

Hasina also noted that today’s BMA is a successful embodiment of the military academy that Father of the Nation Bangabandhu Sheikh Mujibur Rahman had dreamt of providing advanced training and developing capable leadership.

Describing various development programmes for Bangladesh Army, she said the government has established new infantry divisions, brigades, units and training institutes in the Bangladesh Army alongside taking necessary steps for its overall development.
The prime minister said three new infantry divisions and the first para-commando brigade have been formed in the army while sophisticated armoured vehicles and other equipment, such as state-of-the-art engineering and signalling equipment, various weapons, helicopters, aircraft, modern infantry gazettes and various other weapons have been incorporated into the army.

At the function, Battalion Senior Under Officer of the 81st BMA Long Course Abdullah Al Islam received the “Sword of Honour” as the best all-around cadet and Company junior under officer Imrul Kayes got the “Army Chief Gold Medal” for his best performance in military subjects.
On behalf of the prime minister, Chief of Army Staff General SM Shafiuddin Ahmed handed over both the “Sword of Honour” to Abdullah Al Islam and the “Army Chief Gold Medal” to Imrul Kayes.
BSS