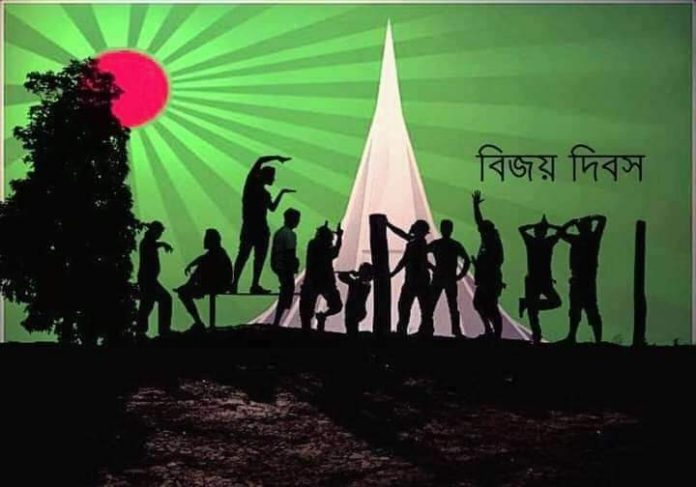 Victory Day this year has special significance, as it coincides with the centennial anniversary of Sheikh Mujibur Rahman and the golden jubilee of Bangladesh’s independence

On Thursday is Victory Day in Bangladesh. On this day in 1971, the nation emerged as an independent country following a nine-month-long bloodstained War of Liberation against the Pakistani occupation forces.

Following the formation of the joint command of the Muktibahini and Indian armed forces at the start of December, it became evident that Bangladesh was on its way to victory in the war. That is why December is regarded as the Month of Victory.

India and Bhutan officially recognised Bangladesh as a sovereign country on December 6.
The liberation war of Bangladesh also drew a huge reaction in the world theatre in December as international power houses like the US, Russia, China, and India got actively involved in favour or against the birth of this nation.

On December 15, it was decided that the Pakistan army was going to surrender soon.

The authorities arranged to formally hold the surrender ceremony on December 16 at the same Ramna Race Course where Bangladesh’s father of the nation Bangabandhu Sheikh Mujibur Rahman had made his historic call for independence only nine months and nine days earlier.

Nirbhay Sharma, a former Indian military captain, who fought for Bangladesh liberation war as a young captain, recently unveiled that day’s scenes in some articles which narrated the events ofDecember 16.

According to Sharma, after some eventful episodes in subsequent minutes, their military vehicle reached Niazi’s headquarters at Dhaka cantonment carrying the message of Nagra, India’s general officer commanding for 1010 area.

“As we entered Pakistan’s Eastern Command Headquarters and parked our jeeps next to General Niazi’s office, a smartly attired, tall and well-built soldier confronted us,” stated Sharma.

According to the captain, Niazi was unshaven and held his head in both hands in despair while mumbling — “Pindi mein baithe haramzaadon ne marva diya (Those sitting in Rawalpindi have let us down).”

He said that Rawalpindi had kept fooling him until that morning with false promises that help was on the way.

As a symbol of surrender, Niazi handed over his revolver to Lt General Aurora. Morethan 90,000 Pakistani soldiers were taken prisoner of war by the Indian forces.

At the time the president of Bangladesh, Sheikh Mujibur Rahman, was still in prison somewhere in Pakistan where he had no information on what was going on in the outside world.

According to the Liberation War Museum of Bangladesh, at around 4:45pm, General Niazi reached the Race Course. For the final time, soldiers from both sides offered him a guard of honour.

At around 5:00pm, General Aurora and General Niazi sat at a table at the Race Course.

Aurora sat on the right side while Niazi was on the left of the table. The instrument of surrender was ready. Aurora handed it to Niazi.

At 5:01pm, Niazi signed the paper and officially acknowledged Bangladesh as a free, independent and sovereign state.

However, there is a debate regarding the exact time of the surrender, with some
books mentioning different times between 4pm and 5pm.

On Thursday, the people of Bangladesh will celebrate the day as their 50th anniversary of victory, coinciding with two giant celebrations – birth centenary of Father of the Nation Bangabandhu Sheikh Mujibur Rahman and golden jubilee of the country’s independence.

President Md Abdul Hamid and Prime Minister Sheikh Hasina issued separate messages on the occasion, paying glowing tributes to the martyrs of the Liberation War in 1971.

Marking the two celebrations, Father of the Nation Bangabandhu Sheikh Mujibur Rahman’s Birth Centenary Celebration National Implementation Committee has taken up a two-day special program titled “the Great Hero of the Great Victory” at theSouth Plaza of the Jatiya Sangsad in the city from
on Thursday.

At the beginning of the first day’s program, Prime Minister Sheikh Hasina is expected to administer an oath to the nation at 4:30pm as part of the celebrations.

At the second session of the program, a discussion will be held with Prime Minister Sheikh Hasina in the chair.

On the occasion, Bangabandhu’s younger daughter Sheikh Rehana will present the “Sraddha Smarak- Mujib Chironton” to the guest of honour.

On Friday a cultural function will be organized at the Parliament premises at 5.30pm.

All programs marking the giant celebrations will be held through maintaining health guidelines in the face of the global Covid-19 pandemic.

The programs marking Victory Day will also include a 31-gun salute, placing of wreaths at the monuments to pay homage to martyrs, hoisting of the national flag atop all government, semi-government and private offices as well as offices of autonomous bodies across the country.
The Victory Day programs also include decorating city streets with miniature national flags and colourful festoons, and illumination of important buildings and establishments, roads and street islands at night.

President Md Abdul Hamid and Prime Minister Sheikh Hasina will pay homage to the martyrs of the Liberation War by placing wreaths at the National Memorial at Savar on the outskirts of the capital at sunrise on Thursday.

This will be followed by the family members of Bir Sreshthos, wounded freedom fighters and Bir Muktijoddhas while Liberation War Affairs Minister AKM Mozammel Haque will lead them.

Later, foreign diplomats, leaders of the Awami League and different political and social organisations and people from all walks of life will pay tributes to the martyrs of the Liberation War.

Contingents of Bangladesh Army, Navy and Air Force as well as Freedom Fighters, para-military forces, law enforcement
agencies and various ministries of the government will participate in the parade to be held at the National Parade Square in the city at 10.30am.

President Hamid will take the salute while Prime Minister Sheikh Hasina will inspect the parade.

Besides, a discussion on the best utilization of digital technology and upholding the spirit of the Liberation War in building Shonar Bangla as dreamt by Father of the Nation Bangabandhu Sheikh Mujibur Rahman will be held on the occasion.

Receptions will be accorded to valiant freedom fighters and family members of martyrs in the metropolis, districts and upazilas across the country.

In line with health guidelines, special prayers will be offered at mosques and other places of worship, seeking eternal peace of the departed souls of the martyrs of the Liberation War and peace, progressand prosperity of the country.

A poster exhibition and historical documentary screening will be held at Swadhinata Stambha and Underground Museum at Suhrawardy Udyan.

Similar programs will be taken at district and upazila levels as well as Bangladesh missions abroad, highlighting the significance of the day.

The day is a public holiday. National dailies will bring out special supplements on the occasion while Bangladesh Postal Department will release memorial postage stamps.

The state-owned and private televisions and radios will broadcast special programs highlighting the Liberation War.

Marking the day, improved diets will be served to inmates of jails, hospitals, orphanages and vagrant homes across the country.

Marking the day, the ruling Awami League will hoist national and party flags at the central party office, Bangabandhu Bhaban and all party offices in the country at sunrise on Thursday.

A delegation of the Awami League will pay tributes to Bangabandhu by placing a wreath at his grave in Tungipara, Gopalganj, at 11am on Thursday.