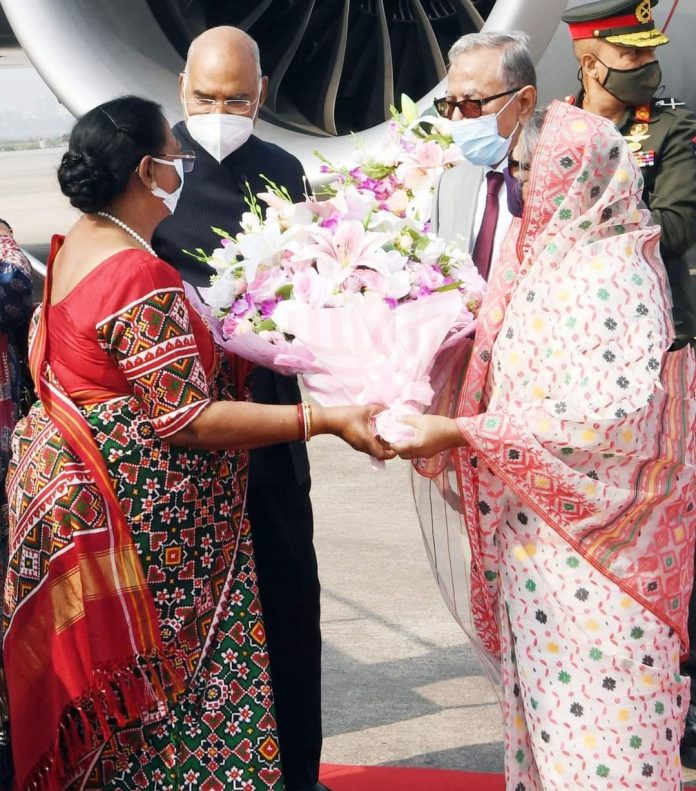 Bangladesh rolled out the red carpet to welcome Indian President Ram Nath Kovind as he arrived in Dhaka on Wednesday on a three-day visit to join the golden jubilee celebrations of Bangladesh’s independence.

President M Abdul Hamid, along with his wife Rashida Khanam, greeted his Indian counterpart upon his arrival at Hazrat Shahjalal International Airport.

Earlier, a special Indian Airlines flight carrying Kovind and his entourage landed at 11:10am (BST) at the airport.

In his maiden tour to Dhaka, Kovind is being accompanied by Indian First Lady Shrimati Savita Kovind and their daughter Swathi Covind, India’s education minister and two parliament members alongside several senior officials.President Hamid greeted his Indian counterpart with a bouquet at the airport while Rashida Hamid presented a bouquet to the Indian first lady.

Maintaining health guidelines due to pandemic situation, the Indian president was given a guard of honour with 21-gun salute by a smartly turned out contingent drawn from the Bangladesh Army, Navy and Air Force.

Abdul Hamid and his Indian counterpart Kovind enjoyed the state honour staying on the makeshift saluting dais while the national anthem of the respective states was played.
The state guest also inspected the parade and subsequently both the presidents introduced the respective countries’ delegations to each other.

The 14th Indian president is the only foreign dignitary participating in the event of December 16 in Bangladesh at the invitation of his Bangladesh counterpart Abdul Hamid to represent India at the celebrations as a guest of honour.