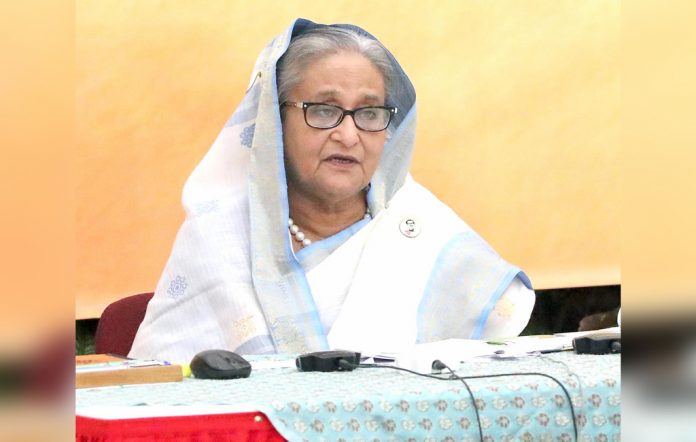 Everything we have achieved since our Independence has been attained by the Father of the Nation and the Awami League, says the premier

Prime Minister Sheikh Hasina has extended her greetings and warm felicitations to the country’s people on the occasion of the 51st Victory and National Day.

“I extend my heartiest greetings and congratulations to the countrymen on the occasion of the Golden Jubilee of our great victory,” the premier said in a message issued in Dhaka on Wednesday.

“The 16th December is our great Victory Day. Bangladesh has completed 50 years of her victory. This is a glorious day for the Bangalee nation. Responding to the clarion call of the greatest bangalee of all time, Father of the Nation Bangabandhu Sheikh Mujibur Rahman, the bangalee nation achieved ultimate victory on this day in 1971 after 23 years of intense politicalstruggles and nine months of blood-shedding War of Liberation,” she said.

She recalled Father of the Nation Bangabandhu Sheikh Mujibur Rahman with deep gratitude.

She also paid her tributes to four national leaders, three million martyrs, two hundred thousand dishonoured women of the War of Liberation and the greatest sons of the soil- the freedom fighters whose supreme sacrifices made independent-sovereign Bangladesh.

Sheikh Hasina recalled with gratitude those foreign states and friends who had extended their support during our Liberation War.

“On the occasion of the ‘Mujib Year’ marking the birth centenary of the Father of the Nation and Golden Jubilee of our victory, colourful programs have been chalked out,” she said.

“In the wake of the coronavirus pandemic, the programs are being celebrated following the health protocols avoidingpublic gatherings.”

Under the undaunted leadership of Bangabandhu Sheikh Mujib, the bangalee nation got prepared for independence through the Language Movement of 1948-’52, Education Movement of 1962, Six-point Demand of 1966 and Eleven-point Movement and Mass Upsurge of 1969, she added.

Hasina went on saying the Awami League secured an absolute majority in whole Pakistan in the general elections of 1970.

“However, Pakistanis did not allow the bangalee nation to assume power,” she continued.

The Father of the Nation realized that the oppression, persecution and deprivation meted out to the bangalee nation would not be ended without achieving independence, she said, adding that accordingly, on the historic March 7 of 1971, he (Bangabandhu) in front of a million of people at the then Race Course Maidan firmly pronounced: ‘The struggle this time is a struggle for our emancipation, thestruggle this time is a struggle for independence.”

On the fateful night of March 25 of 1971, the Pakistani occupation forces launched a brutal onslaught and committed genocide on the innocent and unarmed Bangalees, the premier said.

“At the early hours of March 26, Bangabandhu Sheikh Mujib declared the independence of Bangladesh when the formal War of Independence started.”

She went on saying that the first government of the People’s Republic of Bangladesh with Father of the Nation Bangabandhu Sheikh Mujibur Rahman as the president, Syed Nazrul Islam as the vice-president and Tajuddin Ahmad as the prime minister was sworn-in on April 17 at the historic Mujibnagar and led the Liberation War.
The valiant freedom fighters earned the ultimate victory on December 16 by defeating Pakistani occupation forces and their local collaborators- Razakar, Al-Badr and Al-Sham. We have gotten our red-green flag,” she added.

She further said in just three and a half years of his government, the Father of the Nation rebuilt the war-ravaged country.

Destroyed roads, bridges, culverts, railways, ports were rebuilt to revive the economy, she said, adding that in just ten months, the country’s constitution was drafted on the basis of the spirit of Liberation War under his direction.

“While Bangabandhu Sheikh Mujib was advancing to build an exploitation-deprivation-free non-communal democratic ‘Sonar Bangla’ overcoming all obstacles, the anti-liberation forces brutally killed himalong with most of his family members on August 15, 1975,” she said.

“After the assassination of Bangabandhu Sheikh Mujib, the development and progress of Bangladesh came to a halt. The politics of killing, coup and conspiracy started,” she continu

She also said the assassins and their accomplices promulgated the “Indemnity Ordinance” to block the trial of this heinous murder in history.

Getting the public mandate in 1996, Bangladesh Awami League formed the government after 21 years, she said, adding: “After assuming the office, we took initiatives to establish Bangladesh as a dignified state in the comity of nations.”

“We made the country self-sufficient in food production with special emphasis on agricultural production. The Ganges Water Sharing Treaty was signed with India in 1996. We signed the historic Peace Accord in 1997 with the aim of establishing peace in the Chittagong Hill Tracts. By repealing the ‘Indemnity Ordinance’, we started the trial of Bangabandhu Murder Case,” Sheikh Hasina said.

Forming governments for the three consecutive terms since 2009, Bangladesh Awami League has relentlessly been working for the last 13 years to improve the living standard of the people, she added.

“We are implementing the unfinished works of the Father of the Nation. Today, Bangladesh is self-reliant in food production. We are now focusing on ensuring nutrition for the people,” the premier said.
Our sovereign rights over a vast area in the Bay of Bengal have been established through the peaceful settlement of maritime disputes with Myanmar and India. The implementation of the Bangladesh-India Land Boundary Agreement has put an end to the protracted inhuman life of the enclave people,” she continued.

She said the nation has become free from stigma by executing the verdict of the Bangabandhu murder case.

“The trial of four national leaders has been accomplished. The trial of war criminals continues and the verdicts are being executed,” she added.

“We have formulated the Second Perspective Plan for 2021-2041 and are executing the eighth Five-Year Plan. We have started the implementation of the 100-year ‘Delta Plan-2100′ for the first time in the world.”

“Today, the benefits of Digital Bangladesh have been expanded from urban to remote rural level. The urban facilities are being delivered to every village. All landless-homeless people are being provided houses. No one of Bangladesh will be left homeless,” she said.

“To keep the economy going offsetting the impacts of coronavirus, we have so far announced 28 stimulus packages worth Tk1,31,641 crore. A total of 99.75% people has been brought under electricity coverage. Per capita income increased to US$2,554 now from US$543 in 2005-06,” the premier added.

She further said the present government has made incredible progress in every sector of the country.

Bangladesh is now a “Role Model” in every field of socio-economic development including agriculture, education, health, communication, information technology,industry, trade and commerce, she added.

Bangladesh has received the final approval of the United Nations to graduate from a least developed country to a dignified “developing’ nation”, Hasina said.

“Bangabandhu Sheikh Mujib elevated Bangladesh to a least developed country, and we took the motherland to the row of a developing’ state on the auspicious occasion of ‘Mujib Year’ and the Golden Jubilee of our victory,” she continued.

“Everything we have achieved in the last 50 years since our Independence has been attained by the Father of the Nation and the Awami League,” she said.

She hoped that if this trend of development continues, Bangladesh will be established as a hunger-poverty-free and developed-prosperous country by 2041 as dreamt by Bangabandhu Sheikh Mujib.

The establishment of the nation-state Bangladesh through the victory of the War of Liberation on 16 December 1971 was the greatest achievement of the Bangalee nation, she said.

“To make this achievement meaningful, we have to know and let people know about the Greatest Hero of Independence Bangabandhu Sheikh Mujib and the War of Liberation,” the premier said.

“We will convey the spirit of the great Liberation War from generation to generation- let this be our pledge on this auspicious occasion of the Golden Jubilee of our victory,” she continued.
BSS