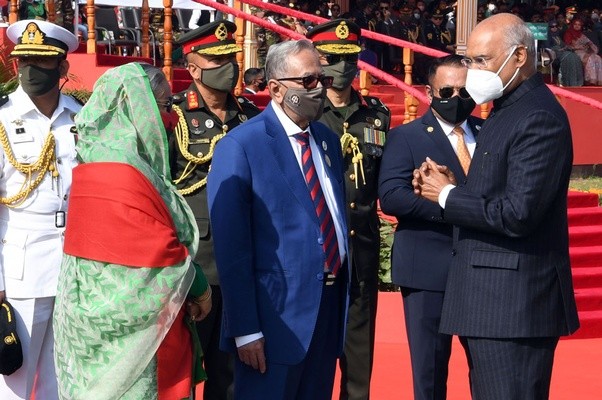 President Ram Nath Kovind said Bangladesh and India have the unique foundation of friendship forged in the Liberation War half a century ago.
History will always bear witness to this unique foundation,” said Kovind, who joined Bangladesh’s Victory Day celebrations in Dhaka on Thursday.

Bangladesh is commemorating the 50th year of its victory in the Liberation War, cemented by the surrender of the Pakistani occupation forces on Dec 16, 1971.

A contingent of soldiers from the armed forces of India, a key ally during Bangladesh’s struggle for independence, also took part in the Victory Day parade for the first time on the historic occassion. This year also marks 50 years of diplomatic ties between the countries.

Paying tribute to the heroes of the Liberation War, Kovind said, “Veterans of that war – both from India and Bangladesh – some of whom are here in this audience, including the Honourable President of Bangladesh – are a living testimony to the power of faith and friendship, which can move mountains.”

“Fifty years ago, the ideological map of South Asia changed irreversibly and the proud nation of Bangladesh was born. The vision of an independent Bangladesh inspired millions. But it seemed to be a remote and impossible dream then to naysayers, sceptics and detractors.”