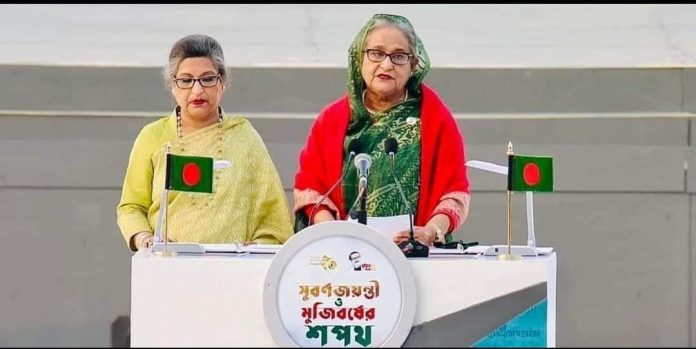 Prime Minister Sheikh Hasina says that everyone should work their hardest for the love of their country and for the welfare of its residents in order to honour the sacrifice of those brave freedom fighters who fought and spilled their blood 50 years ago to free Bangladesh from Pakistan’s rule and put the independent nation on the world map.
We cannot allow their efforts to go in vain,” Hasina said during an oath-taking ceremony on the South Plaza of the National Parliament on Thursday afternoon to commemorate the golden jubilee of Bangladesh’s victory in the Liberation War and the historic occasion of the Mujib Year.

Many joined their voices with the prime minister on the occasion and vowed to build a strong nation with the ideals of Bangabandhu.

“Bangladesh has achieved independence through a bloody freedom struggle against the exploitation and deprivation of Pakistani rulers under the leadership of Father of the Nation Bangabandhu Sheikh Mujibur Rahman,” Hasina said.

“Bangladesh established an independent nationhood on the global stage. On the golden jubilee of the nation’s victory and in the Mujib Year, I solemnly affirm that I will not let it go in vain.”
I will love my country and use all my strength for the welfare of all in it. Through the Father of the Nation Sheikh Mujib’s ideals, we will build a developed, prosperous Golden Bengal free from communalism. May the Divine Creator help us in this endeavour.”

Speaker Shirin Sharmin Chaudhury, cabinet members, leaders of the Awami League and organisations of professionals took the oath at the programme venue. People from all walks of life carrying the national flag also took the oath at eight divisional cities and other towns.

Hasina arrived at the event around 4:30 pm with her younger sister Sheikh Rehana. They were welcomed by Kamal Abdul Naser Chowdhury, chief coordinator of the national committee to organise the programmes of Mujib Year, Bangabandhu Sheikh Mujibur Rahman’s birth centenary celebrations.

Hasina paid tribute to Bangabandhu, the Liberation War martyrs, the victims of the 1975 massacre, four national leaders and extended salutations to the freedom fighters.

“I pay tribute to those who lost their lives to claim their democratic rights to vote and those who were tortured. We earned the victory in the Liberation War after 24 years of struggle.

Father of the Nation Sheikh Mujibur Rahman sacrificed his life to fight for the people’s political, economic and social rights,” Hasina said.

“The people of Bangladesh sincerely followed his instructions [to stay prepared for battle]. On the night of Mar 25, 1971, the Pakistani forces began a massacre, launching attacks on Rajarbagh Police Lines, Dhaka University and other places. Bangabandhu declared independence that night.”

“India, Russia and other friendly nations stood by Bangladesh and we defeated the Pakistani forces with the assistance of our allies.”

After taking the oath, Hasina extended her hearty congratulations to all freedom fighters and the citizens of the country. The programme concluded through a performance by the artists of Swadhin Bangla Betar Kendra, Surer Dhara and others.