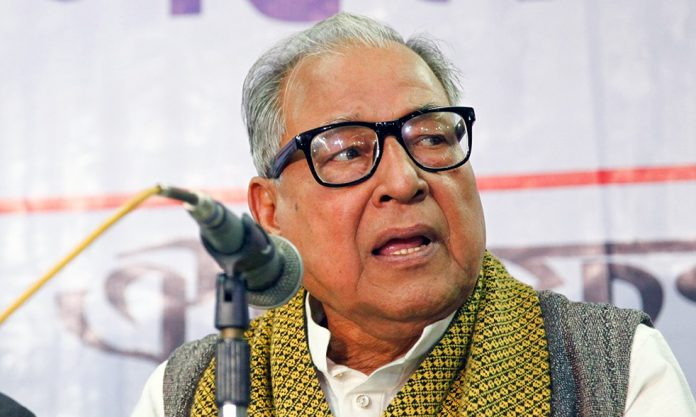 BNP senior leader Nazrul Islam Khan on Saturday alleged that Awami League has been providing wrong information to the country’s people about the Liberation War as part of its move to hide facts.

“Awami League has been trying to make us forget the real history of the Liberation War. I call it an evil attempt. The country needs to get rid of such a crime. Everyone has to be given or recognized what he or she deserves,” he said.

Nazrul, a BNP standing committee member, came up with the comments while distributing prizes among the winners of a drawing and quiz competition at the BNP chairperson’s Gulshan office.
BNP’s committee on the celebration of the Golden Jubilee of the country’s independence arranged the program, marking the Victory Day.

Nazrul described Bangabandhu Sheikh Mujibur Rahman as the architect of the country’s independence and paid homage to him.

He also paid tributes to BNP founder Ziaur Rahman, those who ran the first government of independent Bangladesh, commander-in-chief of the Liberation War MAG Osmani, all other freedom fighters and martyrs recalling their role in liberating the country.

The BNP said the nation had started preparations for the Liberation War through different movements and struggles since the Language Movement in 1952. “All those who led the nation over this long period and initiated the war deserve our respect.”
Had the political leadership not prepared proper grounds, we couldn’t have won the war. All those who supported us from all over the world also deserve our respect. At the same time, we must express our gratitude to those who in our country directly or indirectly helped us. It won’t be acceptable to people if we try to take all credits on our own without recognizing the contributions of others. This is unfair,” he observed.

Nazrul said it was Major Ziaur Rahman who first revolted against the Pakistani occupation forces at midnight on March 25. “We heard the proclamation of independence on the radio for the first time in his (Zia’s) voice. How’ll I accept it if someone now tells me referring to a law or a court verdict not to believe what I heard in my own ears?”

He urged the new generation to try to know the truth. “Remember, knowing lies is not knowledge.”