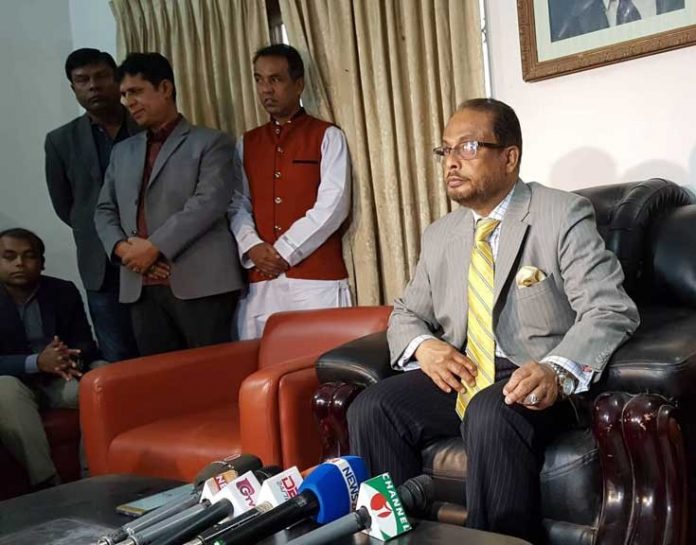 Jatiya Party Chairman GM Quader on Saturday alleged that the dreams of martyrs of the Liberation War remain unfulfilled even after 50 years of the country’s independence as Awami League and BNP have widened the inequality and exploitation in society by clinging to power since the 90s.

“Before the independence, West Pakistanis used to exploit us…we’re still being exploited and our thousands of crores of taka are being siphoned off abroad every year. Awami League and BNP have created discrepancy among people by repeatedly coming to power,” he said.
GM Quader, also the deputy opposition leader in parliament, said people, except those belonging to the ruling party, neither can now get jobs and nor can do any business.

“The basic principle of independence was to build a society to be free from exploitation and discrimination. But Awami League and the BNP have taken the country away from the original spirit of independence,” he observed.

GM Quader made the remarks while addressing a rally at Jurain Rail Gate in the city arranged by Jatiya Party’s Shyampur and Kadamtali units, marking the Victory Day.
He also alleged that the country’s two major parties repeatedly came to power since 1990, and took away the country from the ideals of the Liberation War through corruption, misrule, politicization, and nepotism.

The Jatiya Party chief alleged that Awami League leaders and activists are now not allowing the opposition candidates to stand in the field in the ongoing Union Parishad elections. “Jatiya Party candidates are beaten and forced to withdraw their candidacies with the help of the administration.”

He also alleged that the candidature of the opposition candidates is being cancelled for trivial reasons. “The heroic martyrs didn’t make self-sacrifice for such Bangladesh during the Liberation War. The dream of the martyrs has not yet been materialized. The objective with which the Liberation War was organized still remains mere a dream.”
GM Quader said people are going through serious ordeals due to growing prices of daily necessities and a hike in tariffs of power and gas.

Stating that Awami League and BNP are opposite sides of an obsolete coin, he said people now want to see Jatiya Party in power to get rid of inequality and exploitation.
unb