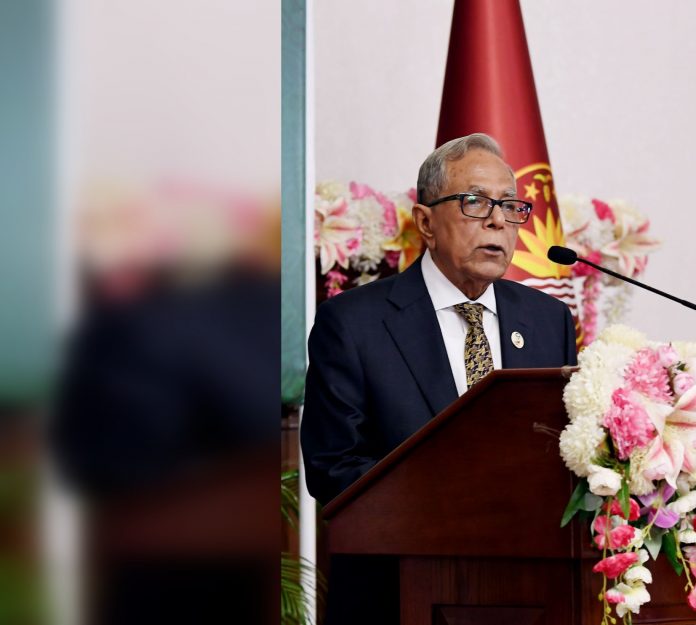 The government is very sincere about modernizing the judiciary as initiative has been taken to implement the e-judiciary project, Hamid says

President Abdul Hamid on Saturday asked the authorities concerned to take initiatives for conducting the proceedings of all the courts in Bangladesh digitally, aiming to fast-track the disposal of pandering cases.

“Measures should be taken to conduct the proceedings of all the courts of the country digitally. This will bring about a revolutionary change in the country’s judicial system,” he said.

President Hamid made the call while delivering his speech at the program marking “Bangladesh Supreme Court Day-2021” at Supreme Court Judges Sports Complex.

The president joined the program from Bangabhaban virtually.
He said making online cause lists has already been introduced in the Supreme Court while an online bail confirmation system is working effectively.

“Since the Supreme Court is a court of record, it has to take initiatives to convert all its documents into digital documents and also to make arrangements for the digital preservation of all activities from filing of cases to pronouncement of judgments or verdicts,” he said.

Hamid said the government is very sincere about modernizing the judiciary as initiative has been taken to implement the e-judiciary project.

He said people now have smartphones in their hands with the advent of modern information technology while people are using different types of apps to complete various tasks on a daily basis with the advancement of technology. “The court management has also undergone a radical change in this digital era.”
The president also underscored the need for bringing dynamism into case management by using all the facilities of information technology.

The use of information technology ordinance was issued by the court on May 9, 2020 to conduct justice in a virtual manner using the modern technology to ensure justice to people which later became a law, President Hamid added.

He thanked both the judges and lawyers of the high and lower courts who have played the important role in ensuring justice to the people seeking justice through conducting judicial proceedings in a virtual manner during the Covid-19 pandemic.

People expect the judges to ensure the rule of law and justice by exercising their talents and wisdom as they are responsible to the country, the people and the constitution, the president asserted.