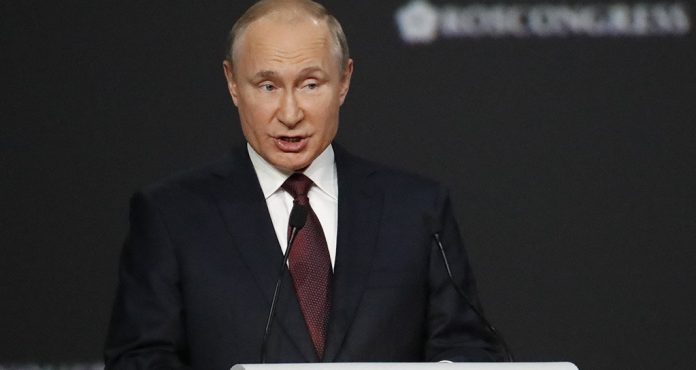 Russian President Vladimir Putin on Tuesdayd blamed the West for escalating tensions in Europe, saying it had incorrectly assessed the outcome of the Cold War.

Speaking to senior military officials, Putin said Russia would respond “adequately” to any Western aggression and would develop its army further.

“Why did they expand Nato and renounce the missile defence treaties? They are to blame for what is happening now, for the tensions building up in Europe,” Putin said.

After what it regarded as its victory in the Cold War, Washington’s judgement has been clouded by euphoria, he said, leading it to poor policy choices.
Russia has amassed tens of thousands of troops on the border with Ukraine, demanding that Nato refuse to accept the former Soviet republic as a member and guarantee that no weapons or troops will be deployed there.

Putin said he hoped for constructive talks with Washington and Brussels on Russia’s demands for security guarantees as there were signs the West was ready to work on the issue.

“Armed conflicts and bloodshed are absolutely not something we would choose, we do not want such a scenario,” Putin said.

He said Russia’s proposals were no ultimatum, but it had nowhere to retreat over Ukraine.

Attempts by Nato to get the Ukrainian army involved in the alliance’s activities present a security threat, Shoigu said.

On Tuesday, a senior Russian diplomat said contacts had already begun between Moscow and Washington on the issue of security guarantees that Russia is seeking, and there was a possibility that the sides would reach an understanding.
Reuters