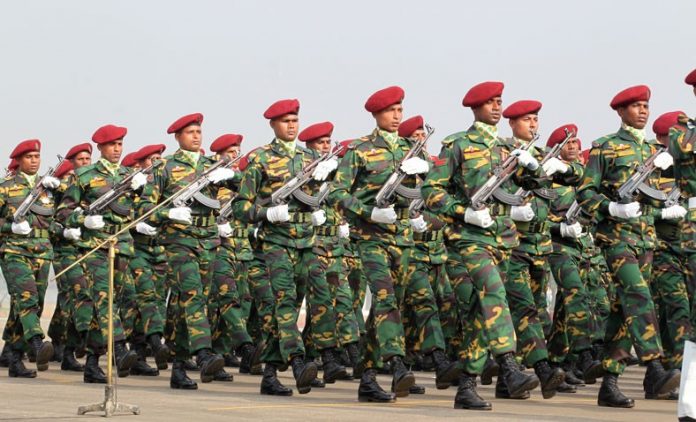 The United States has sought details on millions of dollars in military grants given to Bangladesh each year, as the latter has reportedly not disclosed how it is spending the money.

Before signing an agreement in this regard by December 31, the US government wants to know which forces are receiving the grants and how they are spending the money, said sources at the Ministry of Foreign Affairs.

When contacted, former foreign secretary Shahidul Haque told Bangla Tribune: “Bangladesh has military cooperation with various countries to ensure its overall security and sovereignty. In the current context, it is normal to reinforce such cooperation.”
He added: “We have overall cooperation with the United States under the bilateral and multilateral system, including trade and investment, and this is a part of it. A military cooperation between the two countries was there in the past, is still in force and it’ll continue.”

There is an old law in the US called “Leahy”, which states that the government cannot approve a grant to a security agency or force in another country if it is involved in a crime of torture, extrajudicial killing, kidnapping or rape.

An amendment to the law has recently been introduced and a clause has been added to the agreements to determine which of the donor countries is receiving the grant money. Hence, the US has taken the initiative to sign the agreements anew with the countries receiving military aid.
In that case, any organization or force that is under US sanctions will not receive the US grant.

What cooperation does Bangladesh get?

According to the US State Department, Bangladesh has received a grant of around Tk640 crore since 2015. This amount includes foreign military financing, and international military education and training.

A lion’s share has been given to strengthen the initiative of the Americans in the Bay of Bengal.

In addition, two “Hamilton Cutters” ships were delivered from the US in 2013 and 2015. The US has provided 50 “multi-role armed personnel carriers” to assist the Bangladeshi peacekeepers, stationed in different countries.

Where does Bangladesh stand?

If a country gets a grant, it puts a general obligation on them to inform the donor about the expenditure, especially if there is a legal obligation in this regard. A senior Foreign Ministry official, speaking on condition of anonymity, said: “We are considering the matter. The decision will be taken after considering all aspects.”

The official also said the US had recently decided to give drones worth Tk110 crore to Bangladesh and wanted to know who would use it.

Asked if the US grant could be used by the elite force Rapid Action Battalion (RAB), the official added that the RAB had nothing to do with it.
Because the US has a legal obligation to disclose this information. Had it not been for the [recent] sanctions imposed on RAB, the US would have taken the initiative.”

In July 2020, the US State Department said in a statement that the RAB and the Dhaka Metropolitan Police’s Counter Terrorism and Transnational Crime (CTTC) unit would not receive any foreign aid from them.