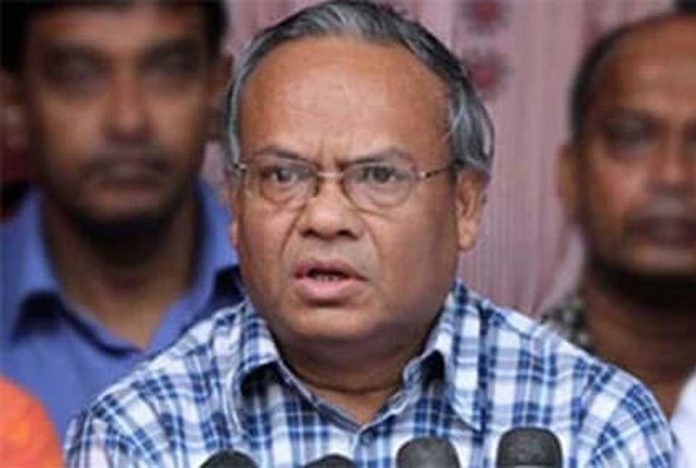 The purpose of the talks is to reconstitute a pro-Awami League Election Commission, says Ruhul Kabir Rizvi

BNP on Saturday termed a farce the ongoing dialogue on the reconstitution of the Election Commission (EC) as the party thinks it will not pave the way for holding a credible national election in the country.

“This dialogue is not meant for holding a free, fair and transparent election at all,” said the party’s Senior Joint Secretary General Ruhul Kabir Rizvi.

Speaking at a program at BNP’s Naya Paltan central office, he said even a crazy person does not believe that the government–which does not allow its opponent to go to polls and voters to go to polling stations–will form a neutral EC and hold a credible election.

“But the state is holding a dialogue to stage a farce. This dialogue is nothing but a farce. It’s also a joke with the nation,” he said.
He alleged that dialogue has been arranged to show the country’s people and the international community that the government is reconstituting the EC through a search committee after the talks with political parties.

Rizvi said the purpose of the talks is to reconstitute a pro-Awami League Election Commission which will remain subservient to the government like Nurul Hud and Rakibuddin-led ones.

At the program, over 100 leaders and activists of Jatiya Ganotantrik Party (Jagpa), led by its Joint General Secretary Insan Alam Akkas, joined Jatiyatabadi Krishak Dal presenting a bouquet to Rizvi.

President Md Abdul Hamid began the talks with the registered political parties over the formation of the new EC on December 20 with the first parley with the main opposition in parliament, Jatiya Party.
Though BNP leaders are making various comments against the dialogue on the EC, its Secretary General Mirza Fakhrul Islam Alamgir on December 22 said their party still did not make any decision on joining or boycotting the talks.

He said their party standing committee will finalise the decision on the matter once they get an invitation letter from Bangabhaban to join the talks.

The five-year tenure of the incumbent Commission, led by Chief Election Commission KM Nurul Huda, will expire on February 14 next year.

The new election commission to be formed by the President through a search committee after the talks will have to arrange the 12th national election between November 2023 and January 2024.
UNB