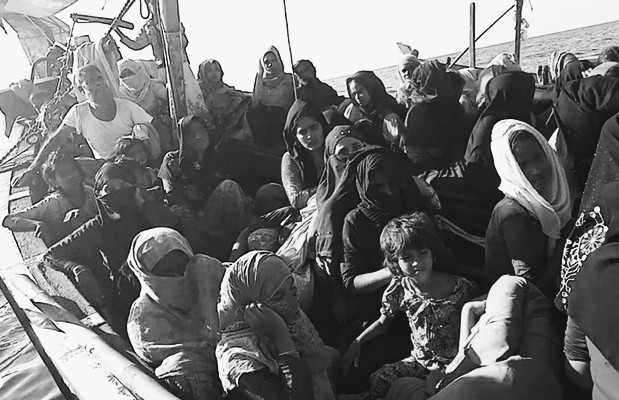 Indonesian authorities will help repair a stranded boat packed with over 100 Rohingya off its coast but will not allow its passengers to seek refuge in the Southeast Asian country and will turn the vessel away, officials said on Tuesday.Fishermen spotted the skiff on Sunday, adrift off the coast of Bireuen, a district on the western island of Sumatra, with around 120 men, women and children on board.

“The Rohingya are not Indonesian citizens, we can’t just bring them in even as refugees. This is in line with government policy,” said Dian Suryansyah, a local navy official.

Authorities would provide humanitarian aid to the stricken vessel, including food, medicine and water, before turning it away, he added.

Indonesia is not a signatory to the 1951 UN Convention on Refugees and is predominately seen as a transit country for those seeking asylum to a third country.

The United Nations High Commissioner for Refugees (UNHCR) said in a statement on Tuesday that the boat had suffered engine damage and should be allowed to land.
UNHCR is concerned about the safety and lives of the refugees on board,” the statement said.

Badruddin Yunus, a local fishing community leader, said that the refugees had been at sea for 28 days and some of them had fallen ill and one had died.

Rohingya Muslim refugees from Myanmar have for years sailed to countries such as Malaysia, Thailand and Indonesia between November and April when the seas are calm. Many have been turned away, despite calls for assistance by international rights groups.

More than 730,000 Rohingya fled Myanmar in August 2017 after a military crackdown that refugees said included mass killings and rape. Rights groups have documented killings of civilians and burning of Rohingya villages.

Hundreds have reached Indonesia over the last few years, after months at sea.
Reuters