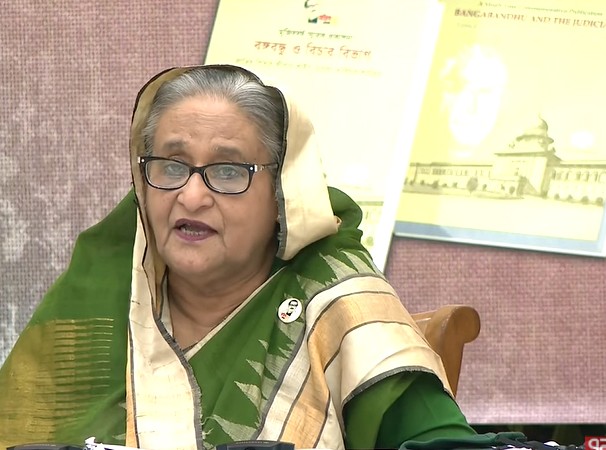 I don’t know why America, which is very vocal about democracy, is giving shelter to a killer!’

Prime Minister Sheikh Hasina on Tuesday said that it was surprising to hear the United States speak of justice, rights and democracy while harbouring a prime suspect in the assassination of Father of the Nation Bangabandhu Sheikh Mujibur Rahman.

“After coming to power, I wrote to all the presidents of the USA requesting them to deport the convicted criminal. I don’t know why America, which is very vocal about democracy, is giving shelter to a killer!” she exclaimed.

“It’s surprising that we have to take lessons from them on the rule of law, democracy and justice,” she added.

She made the remarks while unveiling Mujib memorial books titled ‘Bangabandhu ebong Bichar Bibhag’, ‘Bangabandhu and the Judiciary’ and Mujib Borsho Souvenir ‘Nyay Kantha’ (Voice of the Justice)published by the Bangladesh Supreme Court on the occasion of Mujib Borsho (Mujib Year), reports UNB.

All the cases filed against Bangabandhu Sheikh Mujibur Rahman and their verdicts alongside the laws enacted by the Bangabandhu government were incorporated in the books “Bangabandhu ebong Bichar Bibhag”, and “Bangabandhu and the Judiciary”.

The launching ceremony was held at the Supreme Court premises and the premier joined it from her official residence Ganabhaban.

Hasina said the country will always be there in the world keeping its head ever high. “We’re taking those steps,” she said.

Regarding the miserable days after the assassination of Bangabandhu Sheikh Mujibur Rahman, she said Awami League had to come to power to file the case as the right to seek justice was snapped.Where were the guardians of democracy, basic rights and human rights at that time? Had we not survived or been able to come to power, this trial would not have been completed ever…this is the reality, and the culture of impunity would continue.

Regarding the formation of Bakshal (Bangladesh Krishak Sramik Janata League) by Bangabandhu in 1974, Hasina said, “It wasn’t done to grab power or establish monarchy… it was to establish the rights of the mass people.”

She claimed that after Bangabandhu Sheikh Mujibur Rahman, it is she of this soil who has taken state power outside the cantonment and returned it to the mass people.

The prime minister also said she has one more job to be done regarding the assassination of the Father of the Nation. “And that’s to find out those who are behind-the-scenes conspiracies. This will be dug out one day…there’s no doubt about it,” she added.
Law Minister Anisul Huq also spoke at the program held with Chief Justice Syed Mahmud Hossain in the chair.

At the beginning of the program, guests observed a one-minute silence in honour of all the martyrs who sacrificed their lives in the August 15 assassination, Language Movement and Liberation War in 1971.