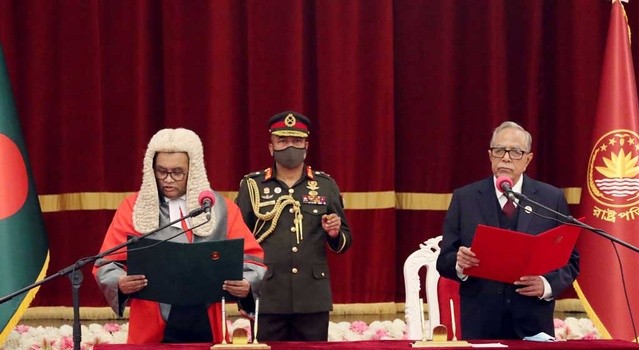 Hasan Foez Siddique, a judge of the Appellate Division, has been sworn in as Bangladesh’s new chief justice.President Abdul Hamid administered the oath to Justice Siddique at Bangabhaban on Friday. The ceremony was held at the presidential palace’s Darbar Hall, with a limited number of guests due to the coronavirus pandemic.

Prime Minister Sheikh Hasina was in attendance as Justice Siddique, dressed in the traditional judicial robes and full-bottom wig, took his oath.

The appointment of Justice Siddique as the 23rd chief justice of Bangladesh’s top court was announced on Thursday. He is replacing Justice Syed Mahmud Hossain. Justice Hossain went into retirement after serving as chief justice for four years.

Born on Sept 26, 1956, Justice Siddique began his journey in the legal profession in 1981 after enrolling as a lawyer in the Dhaka Judge’s Court.

He began practising in the High Court Division in 1983 before becoming an advocate of the Appellate Division in 1999.In 2009, Siddique was permanently appointed to the High Court Division as a judge and in 2013, he became a justice of the Appellate Division.
Justice Siddique has been serving as the chairman of the Bangladesh Judicial Service Commission since 2015.

His elder brother Abu Bakar Siddique is also a retired judge of the Appellate Division.

Article 96(1) of the Constitution dictates that a chief justice may hold office until the age of 67. Born on Dec 31, 1954, Justice Hossain crossed the age limit this year and officially left office on Thursday.