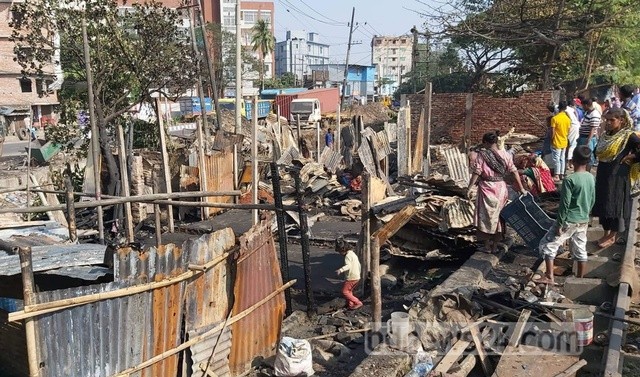 Overload and unrepaired old lines caused most of the incidents, officials said.

A fire caused by an electric short-circuit killed a woman and her child at Dewan Nagar in Hathazari Upazila on Nov 10, 2021. Four other people were injured in the incident.

Another fire from an electric line destroyed dozens of shanties at a slum in the port city’s West Madarbari on Dec 11. One person died as he fell ill after seeing the devastative blaze, the fire service said.
A woman in her 60s was burnt alive by a fire at Bhandari Colony on Dec 19. The fire service said an electric short-circuit caused the fire.

According to the fire service, 1,761 fire incidents occurred from January to the first week of December in the 11 districts of Chattogram division. They include 858 from electrical issues.

Although the power lines at homes and businesses are supposed to be checked by experts every three months, no one follows the rule, said Anisur Rahman, a deputy director at the fire service.

People also take unauthorised connections, putting pressure on the main line. The overload causes the wire to melt and catch fire, the official said.
Short-circuits are caused at homes and businesses when the customers use air-conditioners, refrigerators and other household equipment, putting excessive load on old lines, he said. “Some shopping malls use connections for a certain number of lights. But they add more light bulbs without changing the line.”

She also advised using circuit breakers and other safety devices to avoid accidents.

Even the switches need to be changed after the expiry date is over, she said.

“We tend to use switches year after year, but the old ones may cause sparks.”