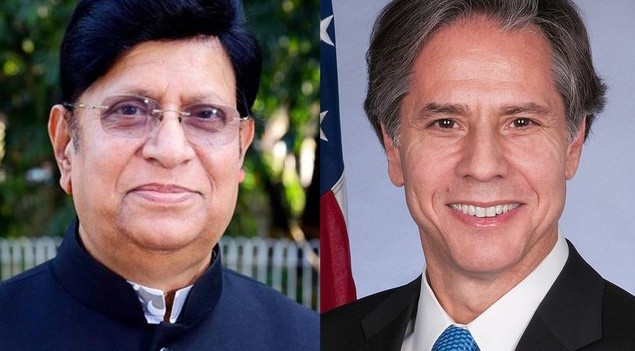 Foreign Minister AK Abdul Momen has written to his US counterpart Antony Blinken requesting a review of the sanctions on some current and former top officials of the Rapid Action Battalion, in connection with ‘serious human rights abuse’.
Momen’s letter ‘reiterated’ the issues he raised in a telephone conversation with Blinken last month. “I told him there was scope to review the decision,” Momen told reporters in Sylhet on Sunday.

Marking Human Rights Day on Dec 10, the US Treasury Department imposed sanctions on 15 people and the assets of 10 organisations in different countries in connection with ‘serious human rights abuse’.

Also, 12 government officials from different countries face sanctions from the State Department barring them from travelling to the US. The list mentions a total of seven former and current RAB officials.
In an instant reaction, the government summoned US Ambassador Earl Miller to convey its position over the sanctions.

After Bangladesh expressed its discontent, Blinken spoke to Momen on Dec 15 over the phone.

The letter was prepared following the conversation and was sent at the end of the year, Momen said.

“Our conversation was quite positive. He [Blinken] said many lawmakers backed the decision,” said the minister.

“I told him [Blinken] that the decision is not acceptable to the people of this country. It isn’t acceptable because our two countries have a very trusted friendship that has lasted nearly 50 years.”
The foreign minister said he told Blinken that RAB is a “credible organisation” and plays a major role in curbing terrorism, the drug trade and human trafficking, which are goals the US also pursues.

Momen said he highlighted the issue of extra-judicial killings in both countries during the phone conversation.

“Police kill here, but over there as well. In your country, police kill a thousand people a year, and you’re talking about killing 400 people in 10 years [in Bangladesh]. That doesn’t feel right,” Momen said.

The government is always upholding human rights in Bangladesh, Momen said he wrote in his letter. “We maintain it strictly. The RAB officials found guilty of wrongdoing were punished. The law is equal for everyone, we told him.”

It is up to the US whether they will revoke the sanctions, Momen said when asked. The government did not directly request the US to withdraw them, but only to review the situation, he said.