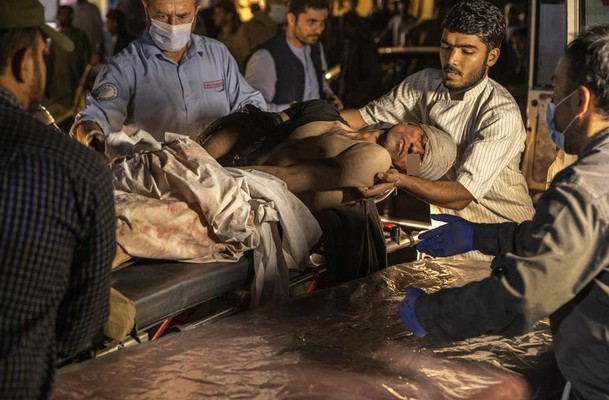 The attack at the airport’s Abbey Gate unfolded four days earlier, during the frenzied final days of the largest noncombatant evacuation ever conducted by the US military. It was one of the deadliest attacks of the 20-year war in Afghanistan.

The Islamic State group identified the suicide bomber as Abdul Rahman al-Logari. US officials said he was a former engineering student who was one of several thousand militants freed from at least two high-security prisons after the Taliban seized control of Kabul Aug 15. The Taliban emptied the facilities indiscriminately, releasing not only their own imprisoned members but also fighters from Islamic State Khorasan, or ISIS-K, the group’s branch in Afghanistan and the Taliban’s nemesis.

“It’s hard to explain what the thinking was in letting out people who were a threat to the Taliban,” Edmund Fitton-Brown, a senior UN counterterrorism official, said at a recent security conference in Doha, Qatar.

Al-Logari was not unknown to the Americans. In 2017, the CIA tipped off Indian intelligence agents that he was plotting a suicide bombing in New Delhi, US officials said. Indian authorities foiled the attack and turned al-Logari over to the CIA, which sent him to Afghanistan to serve time at the Parwan prison at Bagram Airfield. He remained there until he was freed amid the chaos after Kabul fell.

Eleven days later, on Aug 26 at 5:48 pm, the bomber, wearing a 25-pound explosive vest under his clothing, walked up to a group of US troops who were frisking those hoping to enter Hamid Karzai International Airport. He waited, military officials said, until just before he was about to be searched before detonating the bomb, which was unusually large for a suicide vest, killing himself and nearly 200 others.

The attack raised ISIS-K’s international profile and positioned it both as a major threat to the Taliban’s ability to govern the country and, according to American officials, as the most imminent terrorist risk to the United States coming out of Afghanistan.

“The group has gained some notoriety in a way that could be quite compelling for them on the transnational stage,” Christine Abizaid, director of the National Counterterrorism Center, said in October at a national security conference in Sea Island, Georgia. “At the same time, they’re fighting the Taliban. How that force-on-force engagement in Afghanistan will go will have some defining characteristics about what the transnational threat looks like.”
In October, Colin Kahl, undersecretary of defence for policy, told the Senate Armed Services Committee that ISIS-K could be able to attack the United States sometime in 2022. “We could see ISIS-K generate that capability in somewhere between six and 12 months,” he said.

The Parwan prison at Bagram and the Pul-e-Charkhi prison near Kabul were the Afghan government’s two main high-security prisons. The United States built Parwan in 2009 and transferred it to Afghan government control three years later.

On July 1, with little warning and no public ceremony, US forces abandoned Bagram Airfield, the main hub for American military operations. Six weeks later, on Aug 15, Taliban fighters swept into the base and threw open the prison gates.

The Taliban killed one prominent prisoner — a former top leader of the Islamic State group in Afghanistan, Omar Khalid Khorasani — and released more than 12,000 others, including roughly 6,000 Taliban, 1,800 ISIS-K and nearly three dozen al-Qaida fighters, according to US officials.

“The fiasco in Afghanistan has put hundreds of terrorists back on the street,” said Bruce O. Riedel, a former CIA officer who ran President Barack Obama’s first Afghanistan policy review.

One of them was al-Logari, the son of an Afghan merchant who frequently visited India and Pakistan for business. Al-Logari moved to India in 2017 to study engineering at Manav Rachna University near New Delhi.

Recruited by ISIS-K, al-Logari was arrested in relation to the New Delhi plot and handed over to the CIA by India’s foreign spy service, the Research and Analysis Wing, in September 2017, according to Indian media reports that were confirmed by US and Indian officials. A CIA spokesperson declined to comment.

Al-Logari spent time in both the Pul-e-Charki and Parwan prisons, US officials said, but it is unclear how he linked up with the ISIS-K attack cell in Kabul, or why and how he came to be the Abbey Gate bomber.

Soon after the attack, however, American officials and US media reports disclosed that the bomber had been released from prison just days earlier.

The Islamic State group seized on the spectacular nature of the bombing, boasting about its size, location and timing in social media posts, according to the SITE Intelligence Group, which monitors jihadi media.

In the months since the attack, US intelligence analysts and military officials say they have focused on learning more about the ISIS-K strike cell, and any future attacks it may be plotting against the West.

Created six years ago by disaffected Pakistani Taliban fighters, the group’s ranks fell to about 1,500 to 2,000 fighters last year, about half that of its peak in 2016 before US airstrikes and Afghan commando raids took a toll, killing many of its leaders. In June 2020, an ambitious new commander, Shahab al-Muhajir, took over the group and has been trying to recruit Taliban fighters and other militants.

Even before the Abbey Gate bombing, ISIS-K had vastly increased the pace of its attacks in 2021, a United Nations report concluded in June.

The violence has strained Afghanistan’s new and untested government and raised red flags in the West about the group’s potential resurgence.

Gen. Frank McKenzie, head of the US Central Command, said in early December that the departure of the American military and intelligence assets from Afghanistan had made tracking the groups harder but “not impossible.”