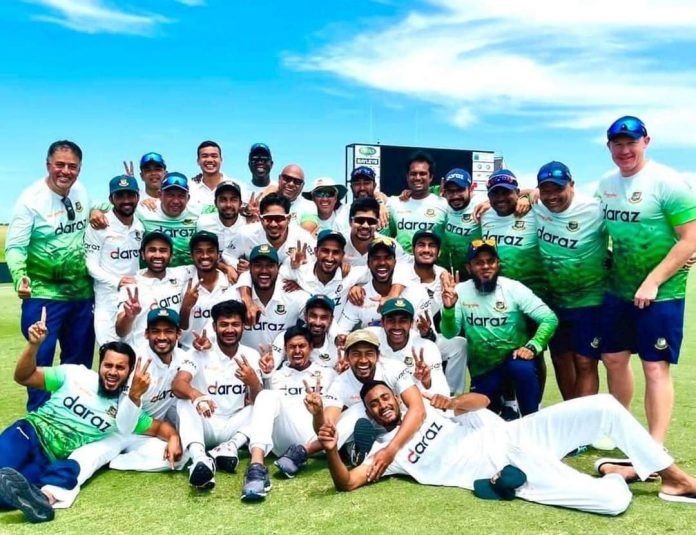 Perhaps the lack of seniors in the XI like Tamim and Shakib created extra responsibility upon the other players.
It was a combined effort from Team Bangladesh as they achieved a historic victory.
Analysis of Bangladesh’s historic first Test win against NZ
In sports, words like historic, greatest of all upsets and giant killing are overused and sometimes become cliché, but for once a lifetime some phenomenon and achievements are so overwhelming, against so many odds, that even those aforementioned pompous words are inadequate to describe them.

Such an achievement was accomplished by Bangladesh cricket team Wednesday when they beat current world champions of Tests, New Zealand in New Zealand.

Bangladesh could never beat the hosts in any format in New Zealand, let alone a Test match, in previous 32 attempts, and with some statistical metrics it was calculated that the win for the visitors, who were weakened by absence of some experienced players, would be the greatest ever upset, surmounting maximum number of odds.
Not only Bangladesh, very few visiting teams can beat New Zealand in their backyard these days and as a matter of fact the last Asian side to achieve the feat was more than 10 years ago.

So, even for the staunchest of supporters thoughts of victory prior to the match would have been a crazy fantasy and counted as a super upset.

The very word upset can be easily fitted with the shorter version of the game but for a five-day match a team must keep the attrition and doggedness to dominate and bring out the desired outcome.
When we look back from the toss, which Bangladesh won and decided to field first on New Year’s Day, we found some reasons that made the Tigers victorious.

All for one and one for all

Perhaps the lack of seniors in the eleven like Tamim Iqbal and Shakib al Hasan created extra responsibility upon the other players who are often termed as “juniors” and hence do not always feel the burden. But in this match it was seen from the very beginning that everyone was shouldering the burden, whether with bat or ball or even while fielding. Just a mere look at the scoreboard will show everyone had some contributions. As a result despite not having any century the Tigers posted a score of 458 in the first innings to get a crucial 130-run lead. Earlier, bowlers also showed immense teamwork to restrict New Zealand for 328, their lowest on home soil against Bangladesh in a first innings of a Test. Young pacers, who seldom get chances to bowl on bowling friendly tracks, were impressive and at the same time specialist spinner Mehedi Hasan Miraz and even occasion bowler, skipper Mominul Haque picked up wickets. Even Taijul Islam, the 12th man held a sensational catch to wrap up the New Zealand innings and made sure Bangladesh did not have to chase more than 40 runs.
Stick to basics, result will come

Bangladesh often lose in Tests after losing their patience but in this Test from the very beginning the bowlers and batters kept focus on doing the basics right. The bowlers kept to their line and length even when they were not getting success, while the batsmen never seemed to hurry and were stubborn to weather the storm created by Kiwi pacers. Surely Bangladesh won the war by claiming the battle of attrition against their mighty opponents.

After the match Mominul said it was the bowlers who brought them the win. From the very beginning it was evident how charged up and disciplined the bowlers were. They were so disciplined on the first morning that New Zealand could score just one from first eight overs losing captain Tom Latham in the process. In the latter stage the hosts came back well but Bangladesh bowlers kept their tenacity and maintained the basics to get the upper hand. As a matter of fact, cricviz, the revered cricket analyzing site showed Bangladeshi pacers bowled more than 22% of their deliveries within the stamps, which is highest for any team in New Zealand since it started measuring. Man of the match Ebadot Hossain, fastest of the Bangladeshi bowlers, continued bowling wicket to wicket and it was most potent on the pitch where balls were getting low in the latter days. On the other hand New Zealand bowlers bowled outside channels seeking swing, which proved to be less lethal on the surface. Taskin Ahmed was accurate from the beginning and with old ball got reverse swing that caused all sorts of trouble for the batters. Shoriful Islam, youngest yet the most intelligent of the lot, bowled his heart out with accuracy and swing to contain the batsmen and he is the one who started brilliantly in the first morning to create the tempo.

Use the tempo, seize the moments
Following the template of an ideal Test match style Bangladesh players rode on the tempo when they had it and seized the moments to create the difference. Although they were dogged and patience most of the time, they attacked when it was required. Liton Das with bat counter attacked to ease the pressure and became serene when required while Mominul anchored the innings. Miraz also attacked during his well made 47 to keep the tempo. Ebadot however, was the one who was most charged up when he got the tempo. The fast bowler was ruthless in the fourth evening when it seemed the visitors were cruising. As soon as he got rid of set batsman Will Young he became relentless and did not drop iota of his energy level and aggression. He created havoc with a fiery spell, continued the ignition on the final morning to end up with an eye-popping figure of 6/46 and with that demolition New Zealand capitulated losing their last eight wickets for 36. Talking about seizing the moment, Shoriful caught a sublime catch which the television commentator hailed as a world class one while Taijul Islam held the aforementioned blinder minutes later. The match will be recalled as long as cricket is alive in Bangladesh and the country will get plaudits from the world but one must remember it was not an upset, neither a fluke but the outcome of sheer teamwork, self-belief and juxtaposition of amazing skills of a young team that remained fearless for five days.