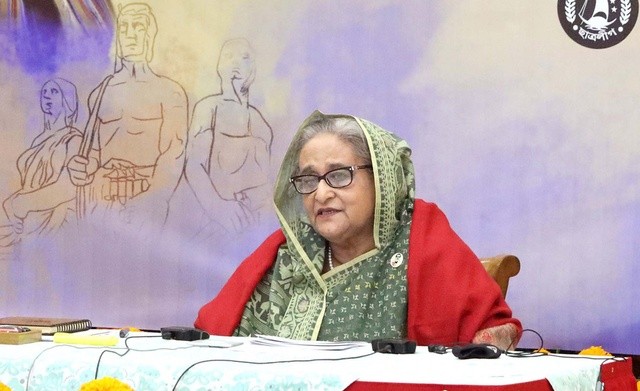 The prime minister urged BCL leaders to avail education and training opportunities
Prime Minister Sheikh Hasina on Wednesday warned that no one will be allowed to play anymore with the fate of the people of Bangladesh.

She joined the programme virtually from her official residence Ganabhaban.The country’s largest student organisation having a glorious heritage of struggle and success, the BCL came into being on January 4 in 1948 as advised by Father of the Nation Bangabandhu Sheikh Mujibur Rahman.

Hasina hoped that the pace of development that the government gathered under her leadership in the last 12 years will always be maintained. “My concern is there… so we shouldn’t fall behind again,” she said.

The PM asked the BCL leaders and activists to make the organisation stronger in a well-organised way for facing challenges in the coming days. “The fourth industrial revolution is on. The BCL has to prepare its leaders and activists to cope with the situation and avail the opportunity properly taking education and training.”
BCL president Al Nahian Khan Joy presided over the programme conducted by its acting general secretary Lekhak Bhattacharya.

At the beginning of the programme, a one-minute silence was observed in honour of all those martyrs who laid down their lives in the August 15 carnage, Language Movement, Liberation War in 1971 and all other democratic movements.

A documentary on Father of the Nation Bangabandhu Sheikh Mujibur Rahman was screened at the programme.
She also inaugurated the Matribhumi Library set up at the BCL central office virtually.

Hasina said the BCL leaders and activists who want to establish themselves as political leaders have to move forward with an ideology and honesty towards prosperity. “In this evolving world, you’ve to keep up the pace and have a specific goal with which you’ll be able to lead the country to fulfill the dream of the Father of the Nation.”

She stressed the need for building BCL with the right values and ideals so that the country may get its future leaders from the organisation as it is closely related with the history and all achievements of the country.

The prime minister said the nation responded to the call of the Father of the Nation and liberated the country by taking up arms.

“When the leader was assassinated with his full family, why did they all come to a standstill? That’s a big question (to me), I never get any answer to that question, maybe I will get it,” she said.
Hasina said the assassination of the Father of the Nation had not only taken away him alone, it also taken away and diminished the spirit and ideology of the Independence.

“The defeated force along with the anti-Bangladesh nexus couldn’t accept the emergence of Bangladesh, they took their revenge of defeat by killing Bangabandhu Sheikh Mujibur Rahman,” she said.

The prime minister said the grassroots activists and leaders of Awami League and BCL were always vocal against the killing and they never took any wrong decision although some of the senior leaders got derailed.

She asked the BCL activists to build themselves as ideologists keeping themselves away from all kinds of greed.

“If you can adopt the ideology of the Father of the Nation once, then it’ll not be a tough job for you to become patriots,” she said.

Sheikh Hasina, the chief of the ruling Awami League and the chief patron of BCL, said the government has given immense importance to education as this is the big tool to eradicate poverty.

She asked each and every BCL leader and activist to give importance to education and educate the illiterate people, if any, surrounding them or in their villages.

Hasina also asked the youth to become entrepreneurs instead of looking for jobs. “Be the employer to give jobs to others… we’re here to provide you all kinds of assistance.”

Hasina appreciated the BCL’s role during the Covid-19 pandemic period and helping farmers harvest crops during this pandemic.

The prime minister, however, expressed dissatisfaction as no BCL leader wore any mask during the rally that took place on Tuesday, marking its founding anniversary.

“The rally was beautiful, but there’s a spot in there, no one wears a mask, I searched the pictures carefully, didn’t see any masks,” she said.

Hasina asked all to follow the guidelines to fight off the spread of coronavirus as a new variant has been found, which is more dangerous than the previous ones.

“Protect yourselves and help others stay safe,” she said.