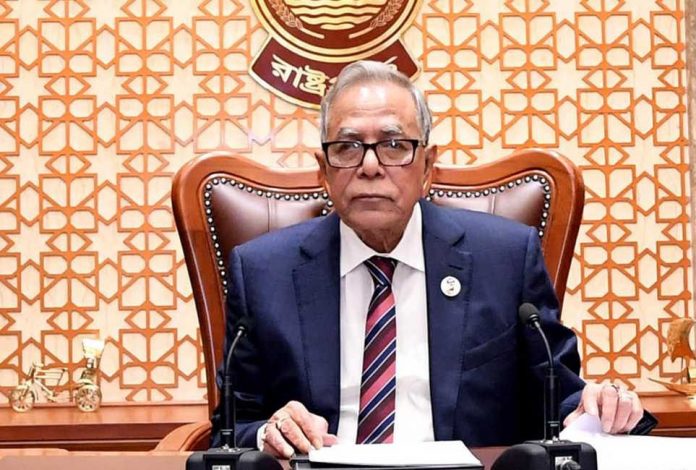 The delegation proposed to form a nine-member Election Commission with three women members
The Gono Front, during its dialogue with President Md Abdul Hamid, yesterday proposed for enactment of a time befitting law and 13 other proposals.

A seven-member delegation led by the chairman of the Gono Front Md Zakir Hossain made 14-point proposal including enactment of new law to constitute an independent, neutral and acceptable Election Commission (EC) in the meeting.

After the dialogue, President’s Press Secretary Md Joynal Abedin briefed that during the discussion, the delegation of the Gono Front proposed to form an EC comprised of honest and corruption-free individuals who believe in the spirit of Liberation War and Independence.
The delegation proposed to form a nine-member Election Commission with three women members.

The leaders of the Gono Front proposed to keep a clear declaration in the election law so that there would be no government interference in the polls. Boycotting the election dialogue would not solve all the problems, they said.

They proposed to form an election-time government led by the incumbent prime minister, comprising all the political parties representing in Parliament after independence.
Welcoming the leaders at Bangabhaban, the president said the formation of an acceptable EC as well as the cooperation of all concerned, including political parties, is a must to ensure a free, fair and credible election. He said healthy politics is essential to ensure public welfare.

On December 20, the first day of the ongoing dialogue with the political parties, the President began the talks with the Jatiya Party, main opposition in the Jatiya Sangsad (Parliament).

Earlier, a dialogue was held with the participation of political parties ahead of the ninth, tenth and eleventh parliamentary elections.

The current EC’s five-year tenure will end on February 14 next year.

During this period, the President will form a new EC, under which the twelfth parliamentary polls will be held.