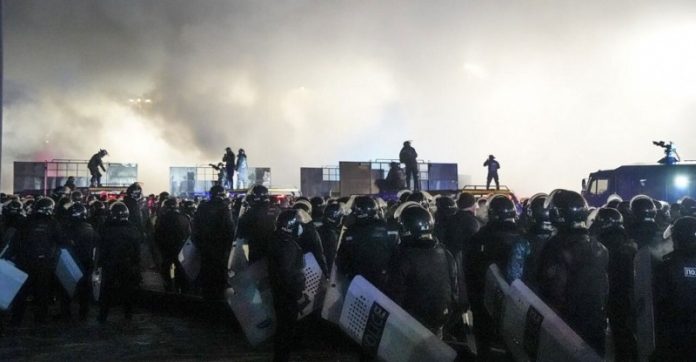 Foreign Ministry Spokesman Saeed Khatibzadeh warns that some foreign actors are after misusing Kazakhstan’s tensions towards stoking unrest in the Central Asian country.

According to Press TV, he made the remarks on Thursday, four days into violent protests at increase in gas prices in several cities in Kazakhstan, which have turned deadly for the country’s police force.

“It is clear that Kazakhstan’s developments are an internal issue, but some foreign parties are after manipulating the circumstances towards stoking the unrest and creating instability in the country,” the spokesman noted.

So far, at least 18 members of the Kazakh law enforcement force have died and hundreds of others among them been injured in the unrest. At least 400 Kazakh citizens have also ended up in hospitals across the country since the demonstrations spun out of control.

A state of emergency has been declared in the country’s largest city, Almaty, where the protesters have set fire to the mayor’s office and stormed other political offices.

Also on Thursday, the United Nations called on all sides in the country to refrain from violence and seek a peaceful resolution to their grievances.

“Stability and security in Kazakhstan is of special importance. Therefore, we hope that calm is restored in the country as fast as possible,” Khatibzadeh urged.

The spokesman finally expressed certainty that the “understanding brotherly country’s government and people” would ultimately deliver a suitable reaction to the situation and frustrate the nation’s ill-wishers through internal integrity.