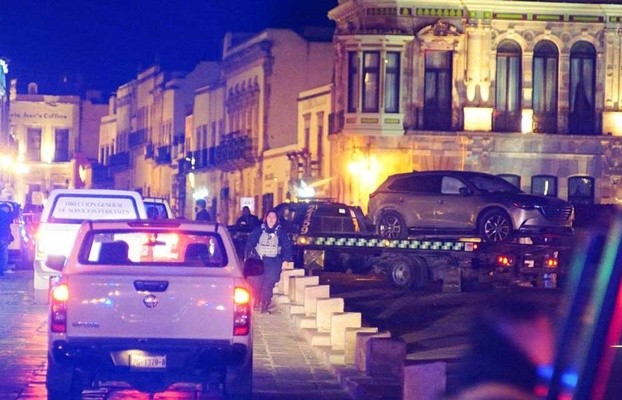 Mexican authorities have arrested two suspects after an SUV filled with 10 bodies was left outside the office of a Mexican state governor in a public square lit up with Christmas tree and holiday decorations, officials said on Thursday.
David Monreal, governor of the central state of Zacatecas, said in a video filmed at the plaza that the car contained bodies of people with apparent signs of beating and bruising.

“They came to leave them here in front of the palace,” he said, referring to his offices in a centuries-old building at the Plaza de Armas of the state capital, also called Zacatecas.

The Zacatecas public security agency said in a statement that government officials found the car, a Mazda SUV, after noting a suspicious vehicle driving in the area. The federal security ministry said there were 10 bodies inside.
Monreal said security has been a major challenge in Zacatecas and that he would reduce the violence.

“Bit by bit we will recover our peace. What we received was a cursed inheritance,” he said.

In a tweet later in the day, Monreal said two suspects “linked to the events” had been arrested.

Zacatecas has become one of the most violent regions of the country due to turf wars among rival gangs. In 2021, the state registered 1,050 murders, about 260 more than in 2020, according to official data.