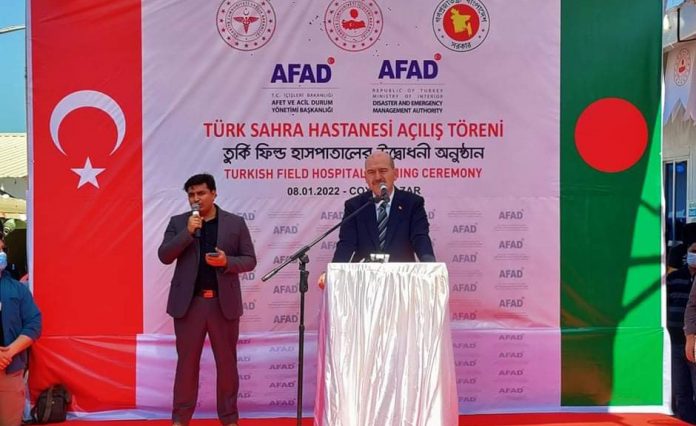 Süleyman Soylu inaugurates hospital rebuilt after being destroyed in a fire last year
Turkey will support Bangladesh in its efforts to tackle the Rohingya crisis, Turkish Interior Minister Süleyman Soylu has assured.

Soylu’s remarks came at a Rohingya camp in Cox’s Bazar during his one-day visit to Bangladesh on Saturday.

The minister also inaugurated a hospital at Balukhali camp No 9 – rebuilt after being destroyed in a massive fire in March last year and run by the Turkish government agency AFAD.

“We couldn’t leave these sad, oppressed people alone as well as Bangladesh, which is home to these people,” said the Turkish Minister, mentioning that Turkey took steps immediately to address the damage caused by the fire, reports UNB.

The hospital carries out 20 operations and examines 2,000 people, said the Turkish Interior Minister, adding that 700,000 treatments have been done in the hospital so far.

Soylu also spoke to Rohingyas of different ages staying at the refugee camps.
Earlier, the Turkish Ambassador, at a programme, said, Prime Minister Sheikh Hasina has earned the title of ‘Mother of Humanity’ by doing exactly the same what Turkey did, opening the door of Bangladesh to the Rohingya people who were fleeing persecution and execution in their homeland.

“So, Bangladesh and Turkey have a lot to offer in this field to be examples to the rest of the world,” he said.

Bangladesh currently hosts over 1.1 million Rohingyas in Cox’s Bazar and Bhasan Char.
The vast majority of them fled Myanmar in 2017 amid a military-led crackdown on the Rohingya that UN investigators said was executed with “genocidal intent” – charges Myanmar denies.