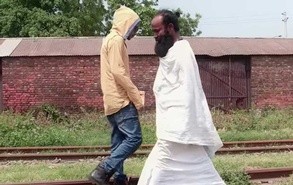 Selim Fakir aka Helal Hossain, the man who became a familiar face on social media as a Baul model after featuring in the music video of the song “Bhanga Tori Chhera Pal”, has been arrested by the RAB, who says Selim is a fugitive in several murder cases.
He had been using his Baul look and outfit to conceal his real identity for a long time, Khandaker Al Moin, a spokesman for the Rapid Action Battalion, said after Selim’s arrest on Wednesday night.

Selim, who used to stay in shrines or railway stations, was involved with at least three murders, Moin said.
RAB officials described Selim as a “terrifying serial killer”.
Two of the cases against him were filed in the northern part of Bangladesh and he was convicted in some of the charges, said Moin.

The director of RAB’s media wing declined to give more details about Selim and his arrest, saying everything will be disclosed at a press conference on Thursday.