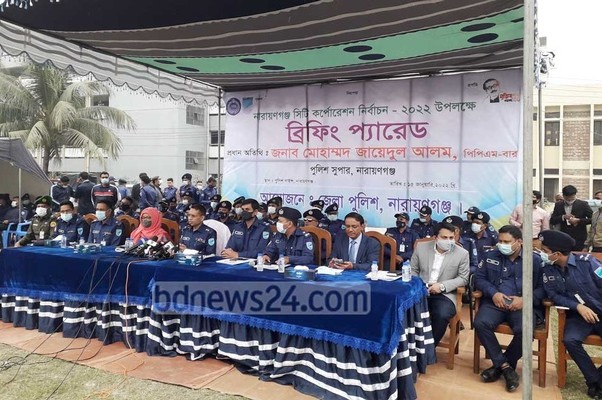 Law enforcement agencies will crack down on anyone who attempts to exert undue influence at polling stations during the Narayanganj city elections, the district’s Superintendent of Police Zaidul Alam has said.
More than 5,000 security personnel from the police, RAB, Ansar and BGB will be deployed to ensure a free and fair election, he said during a media briefing on Saturday.

“Each ward will have one executive magistrate. No one will be allowed to occupy the polling booths.”

The authorities will also implement triple-layered security measures around polling stations to prevent any interference.

“No outsider will be allowed to enter the city corporation area on election day. People above the age of 18 leaving Narayanganj will have to carry an NID card,” he said.
He hopes that the Narayanganj city election will serve as a model for other polls across the country.

Returning Officer Mahfuza Akhter, who was also at the briefing, said, “All preparations have been completed in the interest of a fair election.”

Seven candidates are vying for the office of Narayanganj city mayor on Sunday, with another 148 councillor candidates in the general wards and 34 in the reserved seats. More than 517,000 voters will cast ballots at 192 polling stations in 27 wards.