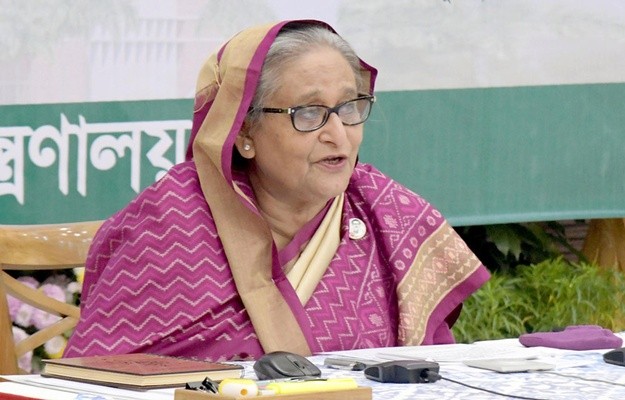 The northern part of Bangladesh does not suffer from food shortage or famine anymore, as the Awami League government has ‘achieved’ its overall development goal in the region, says Prime Minister Sheikh Hasina.
The government has taken initiatives to ensure that the vegetables and other produce in the Rangpur Division are processed and exported abroad, she said in the inaugural ceremony of Rangpur Divisional Headquarter Complex via videoconferencing from her official residence on Sunday.

“There shouldn’t be monga [famine-like situation] or famine in the region anymore. People shouldn’t suffer anymore,” she said.

She recalled the plight of the people in Rangpur in the past and highlighted her government’s efforts to ensure the development of the region.

“People should not forget that they got all the benefits after they voted for the Awami League. Food shortage or famine does not strike the region anymore. I believe we’ve been successful in achieving our development goal for the region.”
Rangpur has become a region with surplus food, while there was a time people died there from hunger, said the prime minister. Other governments never worked for people’s welfare, though their leaders hailed from Rangpur, she said.
Hasina highlighted her government’s initiatives taken for the betterment of the education sector in the region, mentioning they set up Agriculture University in Kurigram and Aviation and Aerospace University in Lalmonirhat. Also, a training centre has been set up in Pairaband village, birthplace of Begum Rokeya Shakhawat Hossain, she said.
“Medical colleges are being set up in all districts in the region.”
Besides education, the road and rail communications have seen an uplift in Rangpur, said Hasina. “All the district highways is expanded to a four-lane one, while the Dhaka-Rangpur highway is expanded to six lanes.”

The government has developed 100 economic zones across the country, said the prime minister, adding that industrial factories should be set up but not indiscriminately.

“We must protect the farming lands as the land in this part is very fertile.” She said the investors should consider the point.

The 10-storey Rangpur Divisional Headquarter Complex has been constructed before its deadline and also the cost was Tk 2.5 million less than the original budget.

“Usually, no one saves money from the budget but seeks more when it comes to implementing a project. I thank the authorities for saving money and hope the others will follow suit,” said Hasina.