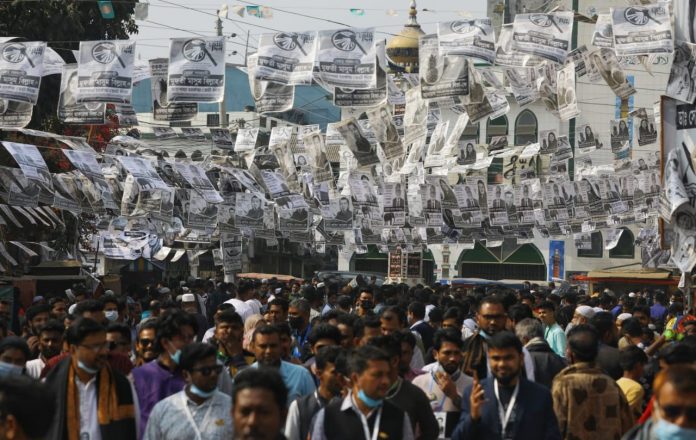 Voting ended in the elections to the Narayanganh City Corporation on Sunday amid a peaceful atmosphere with officials reporting a good turnout.

Voting at 192 polling stations began at 8 am and continued without any interruption until 4pm.

For the first time, electronic voting machines (EVMs) were used at all centre across the industrial city to serve the electorate of a little over half a million.
The EVMs offered a different experience to the voters, but there were reports of fingerprint mismatch and delays due to technical glitches.
Most people are satisfied with the use of EVMs. However, some of the older voters had more difficulty with the new system.
Voters had turned up at polling centres in good numbers to cast ballots, according to Returning Officer Mahfuza Akhter.

After visiting several polling centres and speaking to election officials, Mahfuza said, “We saw a good number of ballots cast in the first four hours. The voter turnout is also very good.”

The official, however, did not want to draw any conclusion on reports of a slow pace of voting.

“Some centres had a slower pace of voting in the morning, while machines had technical glitches in other places. But the technical support team fixed it quickly. The election atmosphere is festive and peaceful,” she said.
The district administration chief, however, said around 40% of votes were cast halfway through the voting.

“Around 35-40% of the total number of votes have been cast in the first four hours,” Deputy Commissioner Mostain Billah told the media at noon.

Narayanganj residents voted to decide whether to re-elect Salina Hayat Ivy as mayor for a third term or replace her with BNP leader Taimur Alam Khandaker.

The BNP has boycotted the elections, but Taimur decided to continue his mayoral run as an independent candidate and was subsequently removed from a senior position in the party.

Speaking to the media after voting, she was confident of securing her third term if the election is free and fair.

“I am optimistic about winning. However, I will accept whatever the outcome of the election is,” she told media outside the voting station.

Taimur Alam Khandaker came to cast his ballot at the Adarsha School centre near the Ward-13 Chasara Eidgah around 8:15 am.

Speaking to the media outside the centre, he said he found the polls atmosphere peaceful then.

However, later in the day, he complained about the EVMs saying that they were slowing down the voting.

Taimur said voters are facing difficulties over the use of EVM. “There are many allegations.
against EVMs. The machines are very slow. There are also reports of faulty machines in some centres.”

The results will be announced from the Returning Officer’s Control Room later on Sunday.

Voters in several polling stations said they have faced trouble while casting their ballots in Electronic Voting Machines (EVMs) on Sunday.

The slow voting due to confusion over using EVMs and technical glitches caused long queues at many voting centres.

A number of voters at the Deobhog Shishubagh Primary School centre complained of not being able to vote as the fingerprint scanners failed to identify them.

“I have been waiting since 9am and its 11am now, but could not cast my vote. The officials say my fingerprints are not matching,” said Aftab Mia.

“It was better before; just stamp the ballot and leave. It has been two hours,” he said.

After waiting for nearly two hours, Asia Begum is yet to exercise her franchise.

“My fingerprints are not matching. And it did not work even after washing my hands with soap. I was told to go to the presiding officer, who has asked me to come later,” she told Dhaka Tribune.

It’s taking more than 10 minutes to cast a single vote at the centre.

“I have been here for quite a while now and it’s taking over 10 minutes to vote. Many people were facing trouble with fingerprint scanning,” said Nur Hossain before adding that the slow voting process means that all the voters will not be able to cast their ballots by 4pm.

Polling officer Nurun Nahar said that the voting process was slower than usual. “The main problem is fingerprint mismatch.

“Voters whose fingerprints are not matching have been told to bring their national ID cards,” said Narayan Chandra Mandal, a polling officer at the centre.

Voters at the Morgan School and College polling station also complained of facing difficulties with EVMs.

Abdul Alim was seen leaving the centre without casting his vote.

“I couldn’t vote after waiting for 30 minutes as the fingerprint scanner failed to identify me,” the agitated 40-year-old said. “I have waited so long.”

The centre’s Presiding Officer Ramzan Ali said that they have been facing some technical issues.

“There have been some cases of fingerprint mismatch, especially with the elderly. In some cases, the issue is with voters’ prints on hands. But the problems have been solved, we hope to cast all votes within 4pm.”

At the Ekrampur Primary School Mosammat Fatema and thirty others were waiting in the queue for more than hour.

A policeman posted at the center was seen putting petroleum jelly on hands of the voters in queue.

“It helps to solve the issue of the fingerprint mismatch,” Constable Mohammad Hanif told Dhaka Tribune.

Similar situation was found at the Bibi Marium School voting centre at the city. Long queues were found at the centre as voters were facing difficulties in using EVMs, which is slowing down the balloting.

“Out of the eight voters, who came in the first 30 minutes after the polls opened, only three could cast their ballots. The others left without exercising their franchises,” said Aleya Begum, a polling agent of a councilor candidate at the centre.

According to her, many voters were confused about the process to cast their ballots in electronic machines.Presiding Officer Mahbubur Rahman said that there have been some difficulties at the beginning.

“Some female voters were confused about the process, but they were able to vote after it was explained to them. I am aware of some cases of fingerprint scanners failing to identify the voters. They were told to wait as their hands were sweating, but they left without casting their votes,” he said.

The slow voting due to confusion over using EVMs and technical glitches has caused long queues at several polling stations.

Polls officials said in some cases it took 20 minutes to cast a single vote while voters said people will lose interest if casting a vote takes so long.