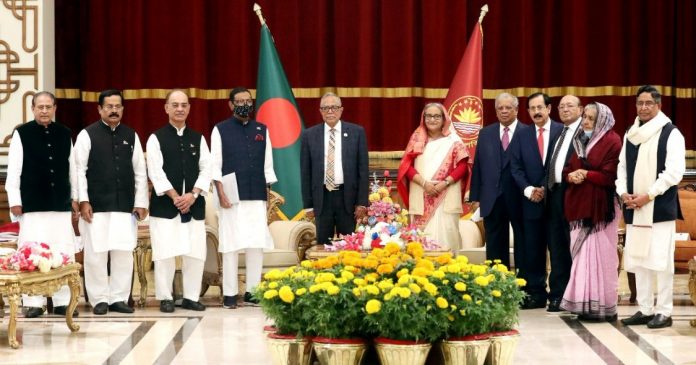 President praised the ruling party for taking initiative on EC law.
President M Abdul Hamid wrapped up his dialogues with political parties on the reconstitution of the Election Commission with ruling Awami League on Monday.

The enactment of a law on the formation of the Election Commission, which has been demanded by several parties during the dialogues, was discussed by the president and the Awami League delegation, led by party President and Prime Minister Sheikh Hasina.

The Cabinet on Monday approved the draft of the Chief Election Commissioner and Election Commissioner Appointment Act, 2022 and it will receive final approval in parliament soon.
On condition of anonymity, a top leader of Awami League told this newspaper: “They will try to complete the process of enacting the law during the current parliamentary session so that the new EC can be formed under the law, but it takes times to complete formalities.”

“We do not have any magic cards to complete the new law enacting procedure so fast. It will be completed as per the existing rules,” he added.
Following the dialogue with Awami League, President’s Press Secretary Md Joynal Abedin told media the president praised the party for the initiative to formulate the law, as it had been heavily demanded by political parties.

When contacted after the dialogue, Muhammad Faruk Khan told Dhaka Tribune: “The environment was very warm. We had a good talk with the President. Discussions focused on some challenges that may arise in the coming days.”

He added that the dialogue touched on how the Naryanganj City Corporation election proved that peaceful, free, and fair elections were possible with the assistance of all political parties.