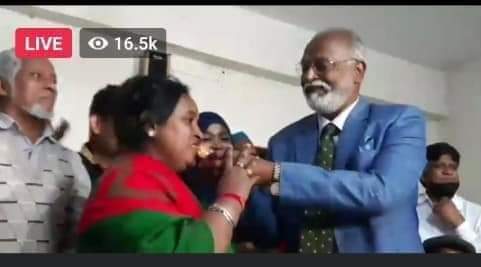 We say all sorts of things during an election, but that is temporary. Now, we will move forward and work together’
Third time Narayanganj City Corporation (NCC) Mayor Selina Hayat Ivy on Monday paid a courtesy call on defeated independent mayoral candidate Taimur Alam Khandaker to bury the electoral hatchet.

Ivy arrived at Taimur Alam’s home in the Masdai area of the city in the afternoon with party leaders and workers. The two exchanged greetings and fed each other sweets.

At the time, Ivy said: “I share a family relationship with Taimur Kaka. Whenever I go to my father’s grave, I also go to his mother’s. We say all sorts of things during an election, but that is temporary. Now, we will move forward and work together to continue the trend of development in Narayanganj.”
She also mentioned that Taimur’s uncle’s younger brother Makshudul Alam Khandaker Khorshed had been re-elected as the councillor of ward no. 13. “I have helped him before and will continue to do so.”

Taimur said: “Winning or losing is not an issue in politics. My family relationship with her (Ivy) is that of a niece coming to her uncle’s house. There is no politics here.”

He added: “I started student politics with the help of Ivy’s father Ali Ahmed Chunkar. The relationship between me and Ivy is above politics. I will cooperate with her.”
However, he also said that he would not participate in another election during the tenure of the current government.

“I got votes regardless of party affiliation. Many people voted for the person Taimur, not any party. If the garments factories had been closed and my leaders and workers were not arrested, I would have won by a huge margin,” he told media.

He further complained that many voters could not cast their votes due to the malfunction of EVMs, claiming that also contributed to his defeat.
During a press briefing in the morning, Ivy said: “I will try to implement everything in [Taimur’s] manifesto. I will definitely take his advice, if necessary. I have taken it before and I will take it again.”
Regarding her three consecutive victories in Narayanganj, Mayor Ivy said: “I will work for the people. I’m a small regional worker of a big political party. Why will a mayoral election affect the politics of Narayanganj? I do not want to say anything about it.”

Regarding EVM voting, she said: “Since the new technology may be a bit of a problem at first, I was saying from the beginning it could decrease voter presence. My voters on the other side of Shitalakshya couldn’t cast their votes. It would have been better if the voting on EVMs was a little faster. The turnout would have been higher.”

She also pointed out the hardship of female voters, especially those who were elderly, as their voting centres were on the second or third floors of the centres.

“Through three consecutive victories, Mayor Ivy has made it clear that she is a deserving candidate,” he added.

Lila Chakraborty, president of Narayanganj District Women’s Council, said the victory of Selina Hayat Ivy was the result of her work for the people in the past. “Although much work hasn’t been done for women under the projects of the city corporation, she stood by the side of oppressed and helpless women in coordination with the women’s council at different times.”

Several ordinary voters said many people did not go to the polls after learning about the EVM embarrassment and fingerprint problems. Besides, considering the last election situation in Bangladesh, many people were averse to polling stations.

Shafayet, a student of a private university in Ward 1 of Siddhirganj, said: “Now they don’t need votes to win. So, there is no confidence in either votes or elections. However, I heard that the election in Narayanganj has been good. Hopefully, if this trend continues, we, the young generation, will have confidence in the vote.”
Mayor Selina Hayat Ivy won by a margin of 66,535 votes this year. She received 159,097 votes for the boat symbol and rival candidate Taimur got 92,562 votes.