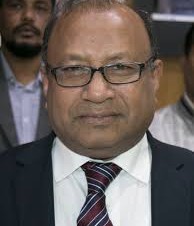 “The Narayanganj City Corporation proved how fair the elections are through EVMs,” he told the media on Monday.

According to the minister, the EVMs have become credible to the diplomats in Bangladesh.
He said unexpected incidents that previously occurred in the local government polls could be avoided due to the digital voting system.

“It is, however, unfortunate that many could not vote due to the machines malfunctioning,” he said adding: “It is not unusual for some errors when a new technology is used.”

After a heated election campaign over 18 days, voting to the Narayanganj City Corporation ended on Sunday with Selina Hayat Ivy bagging victory for a third term.
The constituency has a total of 517,362 registered voters. However, a little over 50% of the voters turned out to cast the ballots, according to the Election Commission.

Despite the peaceful and participatory election, voters at most of the centres struggled to cast their votes by EVMs.

There were reports of fingerprint mismatches and delays due to technical glitches. Long queues of voters were seen at many of the centres and many were seen waiting for up to four hours to cast their votes.