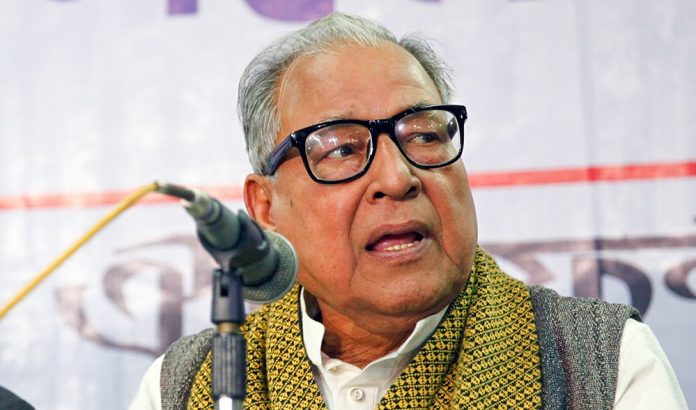 BNP on Tuesday said the draft law on the Election Commission (EC) formation will not yield any positive outcome as the party thinks it will only protect the interests of the ruling party.

“The government’s attempt to legitimise the ongoing process of forming a loyal and incompetent Election Commission in the interest of the ruling party, will produce the same result as in the past. This time it is possibly going to be even worse than in previous elections,” said BNP senior leader Nazrul Islam Khan.

Speaking at a press conference at BNP chairperson’s Gulshan office, he also said what has been happening in the administrative system for so long will now happen in the legal system after the enactment of the law. “That’s why we think it won’t bring any positive change.”
Explaining the reasons behind their disappointment over the draft law, the BNP leader said as per the provision of the draft law no one can be an EC member without having a long experience in government service. “This means no one from civil society or any educationist or jurist can be its member. Where are such restrictions there in the world?”

He said the EC are going to be formed with only government officials or those who have a habit of obeying government orders all their lives and such an EC will not yield any positive outcome.

The move came just one month before the expiry of the five-year tenure of the incumbent Election Commission, led by CEC KM Nurul Huda, as it is going to complete its five years in office in mid-February.

No election under Hasina

He said they would also not participate in the polls under the worthless and incompetent EC formed by the current government.
What they’re going to do this time as per the law ultimately will be the same thing as in the past. In our constitution, it’s clearly mentioned that all power is in the hands of the prime minister. So, nothing will happen without her approval, no matter what the law says. There’s no reason to believe that she will do anything different this time than what she has been doing for so long,” the BNP leader said.

Nothing gained from talks

Nazrul Islam said the President who has no power arranged a dialogue on the EC formation. “History proves that this dialogue is meaningless. Nothing has been achieved in the talks. Rather, the situation has gradually deteriorated.

He said many parties joined the talks and gave many proposals. “But did we see the reflection of any of these proposals? The cabinet prepared the law while the President was holding talks. That’s why this dialogue is pointless.”